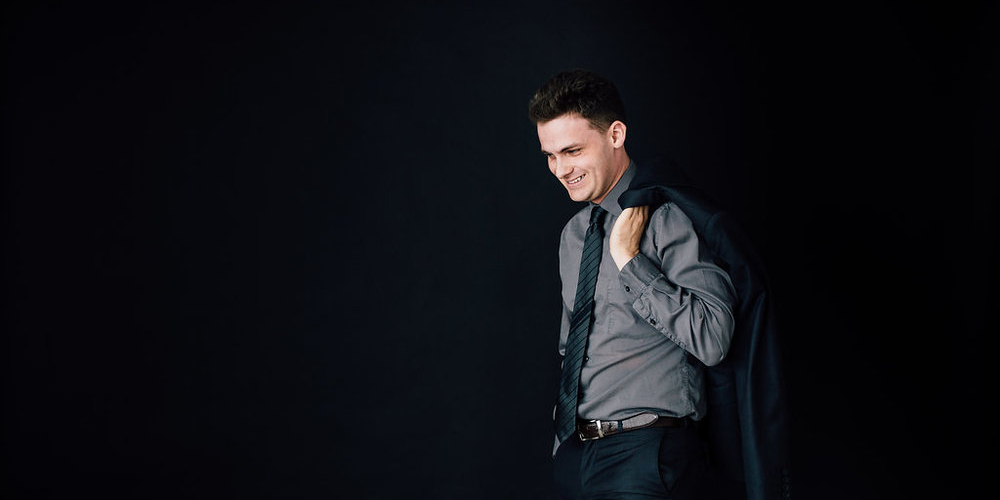 For Nolan Kehler, building a career in which singing can be of service to others, whether through critical storytelling, powerful encouragement, or creative advocacy, is the goal to strive for.

Nolan Kehler (tenor) completed his Bachelor of Music in 2017, concentrating in Vocal Performance. In his graduating year he placed third in CMU's prestigious Verna Mae Janzen Music Competition, and in 2019 he graduated from University of Victoria (BC) with a Master of Music degree in Vocal Performance. New as he is to life as a working artist, Kehler is already booking regular singing work in leading roles, on top of his part-time job as a technical producer for CBC Manitoba.

The man has chops, and energy to burn. Yet Kehler says the cornerstone of his gathering success has not been correct technique, or networking zeal, or sheer hard work, though all of those play their parts. "Good musicians learn how to be good listeners," he says. "They just have to be."

"Something that got said to me several times at CMU was, 'Nolan, there are three things you need to do more often: you need to sit down, be quiet, and be uncomfortable listening to another's experience.' That's something I really try to bring to my role development now. I can tend to have this default setting, this high energy, Nolan Kehler, run-around-the-stage-like-a-manic-gerbil thing but it's just that: a default setting." 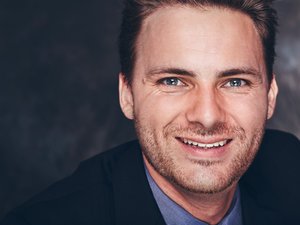 Kehler continues, "My interest now is in being comfortable enough to give away control a little bit, to let that vulnerability guide me so I can learn from the larger collaboration going on around me. I don't have a dream role I'm dying to land. My dream right now is to be that impact performer: to have people come away questioning, having started a dialogue. And to continually be challenged myself."

Currently, Kehler is engaged in just such a dream project workshopping Canadian composer Maxime Goulet's new children's opera The Flight of the Hummingbird. The story is based on a Haida parable about a forest fire that sends all the forest inhabitants running for safer ground. Again and again a hummingbird flies, faster than sight, against the current of her peers, carrying a water droplet in her beak to toss on the raging flames. By her courage, other animals are inspired to turn around, and help fight the fire.

"It's a story that, really, you could not more clearly crystalize what I'm trying to do with art. We're touring schools and we're sharing with kids this indigenous parable about climate change in a medium that we have all trained incredibly hard to work in, and which is—I believe—incredibly powerful. That, to me, is the surest way to get what I'm trying to do into action."

Nevertheless, Kehler says it can be challenging at times, to represent to others how his career in fine arts contributes honest and valuable work. Coming from a small rural town, music is much beloved in his community, but not very often pursued as a career.

"They support you, they really do, but they're also coming from very different job backgrounds. You know, they're farmers or they're in construction or business, or whatever it is. Still, it's amazing how much CMU prepared me for that, because it is a place that consistently makes you ask yourself why what you're doing really matters," he says.

"People I've worked with who know CMU often say 'Wow, we love working with CMU people!' Not only because CMU voice students typically come out good singers, but because they're grounded people who internalize a deep sense of purpose in their work. We're immersed in our training in this culture that prioritize things like social justice, and, well, faith. That formation translates into ours day-to-day lives as musicians. I'm going to throw the dreaded c-word into this—community—but really, you can't get away from it. The whole culture and structure of CMU's music program conspire to remind you that there is something higher that you are serving. You serve your community by leading chapel, or Wednesday Night Worship; you serve your fellow singers by helping them talk through their work in Peer Group. It's just how the place works."

This Fall, Kehler co-starred in a double feature produced by Winnipeg's Flipside Opera, including a performance of Henry Mollicone's The Face on the Barroom Floor. It was a prime example, Kehler says, of why that servant heart and renovating imagination are necessary.

"It's a three person show. There's only one female character, and she's constantly talked about as property. And, spoiler alert, she is killed—shot—twice. (There's a flashback scene first, and then she's killed again at the end.) This character is so objectified, and she has these complicit lines, 'I'm here to please,' and stuff like that. She has no agency as written by this male composer and librettist back in the 70s. So our feeling as performers was, you know, 'This sucks. How can we change this? Without straying too far from what the composer has explicitly asked us to do, how can we give her some agency?'"

The fact that Kehler instinctively links this character's lack of agency with her death by violence, is telling. He mentions that his Mennonite commitments to non-violence come up more than expected in casual conversation with colleagues, often raising some surprise. He says he enjoys these opportunities to build bridges and share what this counter-cultural faith posture means to him.

"Taking that step, to alter her character, I would argue that's an impulse born out of good listening. It comes from being good artists who can not only read the score and discern how to perform it, but who can also read an audience and the current cultural zeitgeist," says Kehler. He attributes those listening skills to the unique musical and spiritual formation he received at CMU.

When work on The Hummingbird wraps up, Kehler says the next task will be finding ways to bring the same level of activism to more conventional roles. "Where is the activism in Mozart, or Rossini? How can we keep interrogating this genre and pushing for valuable renovations to our work? That's what I have to ask myself now."

To learn more about music curriculum at CMU, click here.