How have religion and oil together shaped existence for modern North Americans at the moment of their heightening authority in the 20th century?

That’s one of the questions Dr. Darren Dochuk will explore at this year’s J.J. Thiessen Lectures at Canadian Mennonite University (CMU). Titled, “Crude Awakenings: The Faith, Politics, and Crises of Oil in America’s Century,” the three-part series takes place in the CMU Chapel (600 Shaftesbury Blvd.) on Tuesday, October 20 at 11:00 AM and 7:30 PM, and Wednesday, October 21 at 11:00 AM.

“I’m lecturing and writing very much as a historian, but I would assume that people can see the connections to our present moment,” says Dochuk, who is currently writing a book on the subject, titled Anointed With Oil: God and Black Gold in America’s Century.

“Ongoing battles about pipelines, energy, and the environment… always stir up moral critique, and in some ways, discussion and debate about theology itself—the ways in which people are to connect with, and manage, the Earth and its resources.”

Each of the three lectures will focus on a momentous flashpoint in the life of North American oil and evangelicalism and pause for reflection on what this moment meant long-term for matters of faith and society in the 20th century.

In the process of tracking the chronology of God and black gold in the modern era, the lectures will also raise questions pertaining to evangelicalism’s relationship to capitalism and globalization, energy and environment, notions of time, and broad interests in politics. 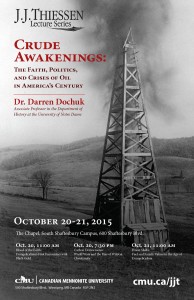 Dochuk says that his experience growing up in Edmonton, AB is one of the reasons for his interest in the subject of oil and faith.

“[Growing up,] I kind of knew intuitively that there was… a certain uniqueness to Alberta, and much of that comes out of its experiences with the boom and bust culture of oil, and the way that landscape again encourages certain religious and political practices,” Dochuk says.

“This is a way for me to revisit my own past, and revisit Alberta itself, and see if I can place that in a broader context of historical development.”

Brian Froese, Assistant Professor of History at CMU, suggested the university invite Dochuk to speak after hearing him present at a conference and reading some of his work on the intersection between oil, religion, and politics.

“The papers and articles he’s produced on that so far are wildly interesting,” Froese says, adding that Dochuk is an engaging presenter and empathetic scholar with keen insights.

“He has something provocative, in the best sense of the word, to say,” Froese says. “He really makes you think about something in a particular way.”

Founded in 1978 by one of CMU predecessor institutions, Canadian Mennonite Bible College (CMBC), the J.J. Thiessen Lectures are named in honour of a founder and long-time chairperson of the CMBC Board. The lectures seek to bring to the CMU community something of Thiessen’s breadth of vision for the church.

For information about CMU visit cmu.ca.