I was invited to reflect on the opportunity and challenge of emerging technologies in local and national contexts in a recent article for the MB Herald.  I’m happy to share it here. I trust it offers up some food for thought as you decide on your own technology use.

I can’t wait for the Going Barefoot 4 conference to start!  Some of Winnipeg’s best public media communicators are coming together at CMU to tackle the question of how to make great news!  I get to work with a fabulous team of planners.  MORE INFO/REGISTRATION: www.gbarefoot.ca

Going Barefoot 4 is a one-day communications conference for faith-based and non-profit communicators.

The MB Herald asked me to review two books recently.  Both authors are compelled to help us think Christianly about culture – particularly culture that is made possible by electricity.  Turner investigates the broader expressions of leisure activity such as film, fashion, comedy, and photography, while Schuurman focuses specifically on computer technology. They both reject a kind of Luddite cultural separatism, and then elaborate what it means to consume, create, and critique culture as a biblically-rooted experience. 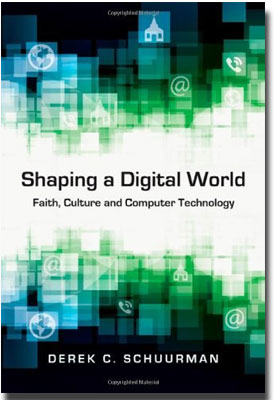 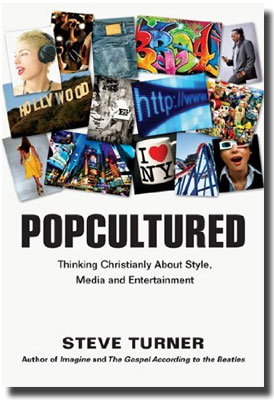 In the last two days I’ve bumped into two worthwhile stories about millenials (18-30 year olds).  One story was referred to me by a friend from the Winnipeg Free Press that addresses the changing landscape of journalism as Generation Y enters professional communication roles: Generation Y making over media.  The second story was delivered in a RoundTable discussion here at CMU by sociologist James Penner as he shared his recent findings on Hemorrhaging Faith, a journey in (and out of) faith by youth and young adults in Canada.  Both of these stories are pushing me to consider the style and substance of my own interests in creative media that is faith-affirming.

A friend of mine in the communications business sent me a note about radio. For anyone who has ears, this information about radio is worth sharing.

“February 13 was the second annual World Radio Day (sponsored by UNESCO. It was created to promote worldwide access to information and freedom of expression over airwaves.

An article on Mashable (http://mashable.com/2013/02/13/radio-in-the-digital-age/) on the occasion of World Radio Day says the following about this medium.”

+++++++
From Mashable…
Despite the evolution of high-speed Internet and television’s prevalence in today’s culture, radio is still a very important and relevant medium — especially in developing nations. World Radio Day reminds us not only that digital hasn’t “killed the radio star,” so to speak, but also that radio can help drive change around the world.

Below, we’ve compiled five intriguing facts about global radio use that may surprise you.

1. 95% of the World’s Population Uses Radio
According to UNESCO, more than 95% of the world’s population uses radio. That high figure probably says it all, but to put it in even more perspective, this is compared to roughly one-third of the global population having access to Internet at all (let alone reliable or high-speed connections).

As a result, radio can reach the most isolated communities (which includes many Native American populations in the U.S.), in addition to the poorest, where Internet cannot.

3. Radio Is the Only News Medium on the Rise in Russia Since 2008
Besides radio, all traditional forms of news media in Russia are in decline — even in Moscow, where there is an advanced print media market. The average monthly adult readership for daily newspapers decreased by 3.1% between 2006 and 2010.

Daily radio audiences, on the other hand, have risen 4% since 2008.

Certain geographical features affect the way countries receive information. For example, in rural areas of the Philippines, mountains get in the way of TV signals, but not radio communications. Radio reaches 85% of the entire country, while TV reaches just under 60%. As a result, radio is considered the most reliable medium for distributing news in the Philippines’ rural interior.

5. AM/FM Still More Popular Than Online Streaming
American adults listen to eight times more AM/FM radio than satellite radio, and 17 times more than Internet audio streaming. It will be interesting to see how these numbers change as innovation in the space increases.

“CMU’s media workshop class took on the challenge of understanding the station’s target audience of 15- to 35-year-old males and developing original content. It’s been a real privilege to partner with the station and Kyle Rudge, IGNITE’s Program Director. Getting to this point, where the radio spot series have made it to air, is very exciting for everyone involved,” says CMU Instructor David Balzer, who teaches Communications and Media courses and produces CMU’s weekly radio show Sunday@CMU.

Students worked in two production teams. One group called its project “Let’s Talk;” the other designed a series called the “CMU Skylab.”

The “Let’s Talk” team included media students Amy Beckwith, Evelyn Kampen, Cameron MacDonald, Laura Tait, and Matthew Veith. Their goal was to ignite change through the act of listening to others. The five students took to the frosty winter streets of Winnipeg with only a provocative sign reading “Let’s Talk” and a microphone. One of the passersby, who stopped to talk, later remarked: “Thank you for listening. Not many people take the time to talk to me!”

What makes the interviews unique is that the interviewers have no questions. “This experience reminds me to take time to listen,” says Veith. “I’m always hurrying to places. This activity has forced me to pay attention to what’s going on in other people’s lives. It really is eye-opening.”

The “CMU Skylab” radio spot series was produced by Daniel Friesen, Thomas Krause, Erin Olsen, and Alec Schaefer. The series is hosted by a “humorous alien scientist” named Dr. Karl from his UFO-like laboratory. The host, being concerned with the notion of social change on Earth, sends his earthling assistants out to interview people who actively give of themselves to make a difference in the lives of those around them. He enjoys adding his own brand of witty banter as commentary throughout the spots.

Kyle McDonald, author of “One Red Paperclip,” states in an audio interview with earthling and CMU student Daniel Friesen, “If you do something, and continue on that path, eventually something great will come of it… it’s easy to do and the sacrifice is really small.”

The student team feels that Kyle MacDonald’s experience of trading up from a paperclip to owning a house in Saskatchewan captures the spirit of the Ignite Change campaign, which encourages listeners to believe that starting small can lead to a big difference.

Ignite 107FM will broadcast the Let’s Talk and CMU Skylab series from March 5 to May 20, launching a new spot each Monday morning at 8:20 am during The Hype morning show. The featured radio spot will then run for one week, aired four times a day at a variety of times.

Tune in to Ignite 107FM, or visit ignite107.com or media.cmu.ca to hear the Let’s Talk and CMU Skylab radio spot series.

Golden West Radio is “Community Service Radio” serving small and medium-sized communities across Manitoba, Saskatchewan, and Alberta with a network of AM and FM radio stations and Online Community websites.

A Christian university in the Anabaptist tradition, CMU offers undergraduate degrees in arts, business, humanities, music, sciences, and social sciences, as well as two graduate degree programs. CMU has over 1,700 students, including Menno Simons College and Outtatown students, and is a member of the Association of Universities and Colleges of Canada (AUCC).

A timely workshop specifically for non-profit, NGO and faith-based communicators in the Winnipeg area.  This workshop is being coordinated by the team that puts together the Going Barefoot Communications Conferences.

To Tweet or not to Tweet: Developing a social media strategy for your organization
Presenter: Susie Parker, Sparker Strategy Group
When: February 17, 2012 (Friday), 10 am – 1 pm, lunch included
Where: Canadian Mennonite University, 600 Shaftesbury Blvd (South Campus, southwest corner of Grant and Shaftesbury) Conference Room, main floor
Cost: $25/person. (Payment at door.)
RSVP: By February 3, 2012 to  John Longhurst, Longhurst4@shaw.ca
Description:
Using social media to raise awareness of your organization comes naturally to some, and is a mystery to others. For many this communication channel raises questions we’ve not been asked to think about before: What does your organization want to achieve on social media?
What’s your social media message? How do you attract friends/followers? Twitter, Facebook, Google+ – how many channels are enough/too many? Who is the ‘face’ of your social media presence? What are the rules: Content? Frequency? Relevance? Repetition? Tone? How do you measure success in social media?

Going Barefoot III is a one-day communications conference is being hosted at CMU on Friday, October 14.  Well worth signing up, for anyone interested in creative communications harnessed for good in our world.

Everything Old is New Again: Communication and Fundraising in the Digital World.

The presenters are:
Owen Charters, CEO, CanadaHelps.
Presentation: The Hitchhiker’s Guide to the Future of Fundraising.
Workshop: Everything Old is New Again: The Fundamentals of Fundraising in the Digital World.

(A slate of additional workshops will also be offered.)

To register, CLICK HERE
The past two times, registration had to be closed–we filled up all the spaces. So don’t wait too long . . . .

A note from John Longhurst, Conference Planning Coordinator.
As a by-the-way, what we do in Winnipeg by gathering regularly as church communicators, and holding conferences like Going Brefoot, is unique in Canada as far as I can tell–in my travels, I haven’t encountered any other group of church communicators doing what we do. (Not to mention giving the country its first-ever national conference on faith and the media, held in Ottawa in 1998.) Once again, Winnipeg leads the way!

As Fall startup approaches, this graphic caught my attention.  If education was really about the mere transmission of data, I imagine these stats would be at the top of most faculty meeting agendas.  In my view of education as formation rather than information, I don’t disregard these stats but they are contextualized by a deeper question of what it means to be shaped in character.

Tomorrow evening, Tuesday July 5, I’ll be hitting the road from Winnipeg to Ottawa as part of a Guinness World Record attempt at the fastest bike ride across Canada. Let’s be very clear, my role is NOT to ride the bike, that’s 54-year old Arvid Loewen’s job. My role has been and will continue to be to capture the story and get it out to the web and mainstream media outlets across the country. It’s a hands-on realtime exercise in putting some of our latest technologies to good use.

Arvid is raising awareness and funds to rescue orphaned street kids in Kenya. Pointing an iPhone at that is well worth the effort! Visit www.grandpascan.com/ride to follow the ride from July 1-13?? (yes, 6040km in 13 days on a bike) and to see what all you can produce on an iPhone that makes a real difference.