The 2015 edition of the John and Margaret Friesen Lectures at Canadian Mennonite University (CMU) will explore how Mennonites have imagined the animal kingdom over the last 150 years.

Dr. Royden Loewen, Chair in Mennonite Studies and Professor of History at the University of Winnipeg, will give a lecture titled, “‘Come Watch This Spider’: Animals, Mennonites, and the Modern World,” at 7:00 PM on Tuesday, March 17 in Marpeck Commons (2299 Grant Ave.). 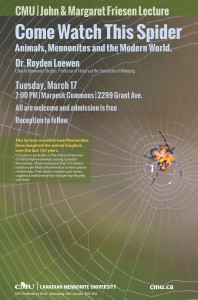 The lecture will focus on the ethical dimensions of animal-human relations among Canadian Mennonites. Often overlooked, their rich literary traditions are filled with references to inter-species relationships. Their diaries, memoirs, and novels suggest a relationship that changed significantly over time.

“There is simply a deeper respect that humans had for animals in the pre-industrial times of the late 19th and early 20th centuries,” Loewen says. “It’s not that humans were not dominant over animals… but that dominance was expressed in a different way.”

That fundamental respect during pre-industrial times was followed by an objectification and commodification of the animal during the mid to late 20th century as Mennonites embraced the ‘modern’ world.

By the turn of the 20th century, some writers from the edges of Mennonite society began to confront the very idea of animal subjugation.

Loewen hopes that those who attend the lecture are challenged to recover a basic respect that people once had for animals.

He also hopes that by learning about animals in the history of Canadian Mennonites, a greater understanding of the nature of the modern world can be achieved.

“A generation ago, Mennonite historians began writing ordinary people into the narrative – not just bishops and (other leaders),” Loewen says. “We did that to write a more inclusive history, so in the name of a more just and inclusive history, we also need to understand the creatures of the earth.”

Dr. Paul Doerksen, Associate Professor of Theology and Anabaptist Studies at CMU, says Loewen’s reputation as a world-class scholar made him an obvious choice to deliver the 2015 John and Margaret Friesen Lecture.

“Nobody’s better at social history than Roy,” Doerksen says, adding that as a Mennonite university, it is important for CMU to host Mennonite scholars of Loewen’s calibre.

“We have to have people like Roy here to help us learn and see issues in new ways,” Doerksen says.

Loewen has authored or co-authored seven books covering a variety of aspects of Mennonite history. Over the years, he has been a research fellow and visiting scholar at academic institutions around the world.

He and his wife, Mary Anne, currently live in Steinbach, MB, where they are members of Steinbach Mennonite Church. They have three adult children: Rebecca, Meg, and Sasha. Loewen and his son operate a small grain farm near Steinbach.

The John and Margaret Friesen Lectures in Anabaptist/Mennonite Studies are co-sponsored by CMU, the Mennonite Heritage Centre, and the Centre for Mennonite Brethren Studies.

At the lecture, selected works by Manitoba artist Lynda Toews will be on display. These works are from “A Place in the Kingdom: Paintings and Stories Celebrating Farm Animals,” an exhibit the Mennonite Heritage Centre Gallery is hosting from March 13, 2015 to June 20, 2015.

For information about CMU, visit www.cmu.ca.