Dr. Katharine Hayhoe set to speak about science in a ‘post-truth’ world

Canadian Mennonite University is pleased to announce it will host acclaimed atmospheric scientist Dr. Katharine Hayhoe as its 2017 Scientist in Residence.

Hayhoe is a professor at Texas Tech University and the director of its Climate Science Center. In 2014, TIME magazine listed her as one of the 100 most influential people in the world.

Hayhoe will appear on campus January 30−February 1 to share her insights, observations, experience, and personal reflections in a number of speaking events open to the public.

As a means to minimize carbon emissions related to these speaking events on the topic of climate change, Hayhoe’s appearances will be via two-way video conference technology.

“Katharine is a renowned researcher with more than 120 peer-reviewed publications in the top journals in her field,” Rogalsky says. “More than that, she’s a fantastic communicator with a remarkable ability to talk about the connections between science and faith.” 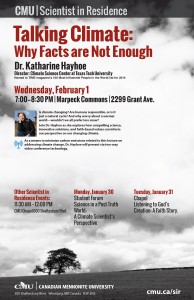 A lecture on Wednesday, February 1 at 7:00 PM in Marpeck Commons (2299 Grant Ave). The lecture is titled, “Talking Climate: Why Facts Are Not Enough.”

For the first time ever, all of these presentations will be streamed live on YouTube, allowing anyone from anywhere in the world to watch and participate in the discussion. It’s an exciting aspect of this year’s events, Rogalsky says.

“It really allows us to involve people from off campus in ways we haven’t in the past,” he says.

Hayhoe says she is looking forward to her time as Scientist in Residence because it will give her the opportunity to talk about both science and faith in the same breath.

“So often the two are completely separated in our society and even in our Christian communities,” she says. “The reality, though, is that if we truly believe that God created this amazing universe that we live in, then what is science, other than trying to figure out what He was thinking when He created it?”

While Hayhoe has been named one of Foreign Policy’s 100 Leading Global Thinkers, as well as one of POLITICO’s 50 thinkers, doers, and visionaries transforming American politics, she may be best-known to many people because of how she’s bridging the broad, deep gap between scientists and Christians—work she does in part because she’s a Christian herself.

Together with her husband Andrew Farley, a professor of applied linguistics, pastor of Church without Religion, and best-selling author, Katharine wrote A Climate for Change: Global Warming Facts for Faith-Based Decisions, a book that untangles the complex science and tackles many long-held misconceptions about global warming.

Her work as a climate change evangelist has been featured on the Emmy award-winning documentary series Years of Living Dangerously and The Secret Life of Scientists and Engineers. In 2012, she was named by Christianity Today as one of their “50 Women to Watch.”

Hayhoe has a BSc in Physics from the University of Toronto and an MS and PhD in Atmospheric Science from the University of Illinois. Hayhoe is currently serving as lead author for the upcoming Fourth U.S. National Climate Assessment and producing her new PBS Digital Studios short series, Global Weirding: Climate, Politics and Religion.

“My hope is that people walk away from these events with a better understanding of climate change and the role they can play in caring for our planet,” says Rogalsky.

All of the Scientist in Residence events are free and open to the public. For more information, visit cmu.ca/sir.