“What does it mean for me to be a Mennonite?”

That’s the question that brought Daniel Rempel to CMU. Rempel is finding the answers to that question as he works toward a Master of Arts in Theological Studies in CMU’s Graduate School of Theology and Ministry.

Rempel’s question first occurred to him while he was earning an undergraduate degree in Biblical and Theological Studies from Providence University College in Otterburne, MB.

“While I was there, I got introduced to a whole host of other denominations,” Rempel says, including Anglicans, Baptists, and Pentecostals.

Studying in the Graduate School of Theology and Ministry, where the professors are approaching topics from an Anabaptist perspective, has stoked Rempel’s interest.

“Coming to theology from that perspective has been enriching and made me want to learn more about my tradition,” Rempel says.

Halfway through his degree, Rempel is enjoying his time at CMU. The academics are rigorous, but professors are always available to support students and help them succeed.

“Pretty much every professor that I’ve had has just been fantastic,” Rempel says. His fellow students are also fantastic.

“You can’t learn in isolation, and so I’ve always found the classroom to be a life-giving place,” Rempel says. “You come together with people who have similar goals and a similar desire to better understand God.”

In his classmates, Rempel has found people he can be friends with, bounce ideas off of, and continue the conversation with once class is over.

“That’s been helpful and beneficial,” he says.

The affordability of tuition and the availability of bursaries has also made studying at CMU worthwhile, Rempel adds.

“Compared to other schools it is very affordable, and I’ve been fortunate to be on the receiving end of some very significant bursaries from some very generous donors,” he says.

Rempel is preparing to write a thesis that will explore how the church can be more welcoming and inclusive toward people with disabilities. His interest in the topic stems from working in group homes for the past two years.

“I’ve been really enlivened by that work,” Rempel says. “My eyes have been opened to the world that people with disabilities are living in… (It) has led me to ask some of these questions, and I’m looking for theological answers to my questions.” Rempel is considering doing a PhD after he finishes his Master’s.

“I’m definitely trying to keep that door open, but ultimately what drives me in my studies is that I want to do theology in a way that benefits the church,” he says.

In the meantime, he’s happy at CMU.

“I’m very thankful for the people here and for what I’ve learned so far,” Rempel says. “I’m about halfway through my degree now, and I’m looking forward to what’s to come. 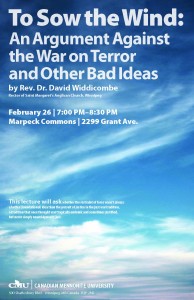 ‘I’ve always wanted to do what I can to make the community stronger,’ Gillingham says

Students put their studies on hold for a variety of reasons, but Scott Gillingham’s reason is unique: he was elected to Winnipeg’s city council.

Gillingham, a student in Canadian Mennonite University’s (CMU) Graduate School of Theology and Ministry (GSTM), was declared the winner in the St. James-Brooklands ward when polls closed in Winnipeg’s civic election on Wednesday, October 22.

For Gillingham, who was studying at CMU part-time while working as the lead pastor at Grace Community Church, a Pentecostal congregation in Headingley, MB, running for city council was a logical progression after years of community involvement.

“It has always been very important to me to be involved outside of my pastoral role in community organization,” the 46-year-old says. “I’ve always wanted to do what I can to make the community stronger, to make where I live better.”

Gillingham helped start a Winnipeg Harvest food bank that serves more than 60 families every two weeks, he sits on the Winnipeg Airports Advisory Committee for the Environment, and he has been an active part of the Portage Trail Soccer Club.

He is also the co-chair of the capital campaign for the St. James Assiniboia 55+ Centre, which is relocating its activities to the main floor of the St. James Civic Centre.

Gillingham ran for the Progressive Conservative Party of Manitoba in St. James in 2011.

While he lost that election, he says it was a good experience for his wife, Marla, and their two children: Hannah, who is currently a student in CMU’s Outtatown Discipleship School, and Andrew, who is a Grade 11 student at Westwood Collegiate. The 2011 campaign gave the family an idea of what to expect this past fall.

“The highs during the (recent) campaign weren’t so high and the lows weren’t so low this second time around,” Gillingham says. “We were able to anticipate a little more what was coming up and what the campaign would look like.”

Gillingham grew up near Carmen, MB. His father was a farmer before starting a career later in life with Manitoba Hydro, and his mother was a nurse. The family was always heavily involved in its church.

Gillingham felt a call to ministry in his early 20s and completed a diploma in pastoral theology at Horizon College and Seminary in Saskatoon, SK in the early ‘90s. He has worked in ministry until this past August, when he left Grace Community Church to focus on his campaign.

Gillingham’s interest in politics dates back even earlier than his interest in being a pastor. He recalls two formative experiences.

The first was when he was 11 or 12 years old and his family made its annual trip to Lower Fort Garry. Ed Schreyer, who was governor general at the time, was standing at the gates and greeting people.

Gillingham recalls being fascinated with the role and importance of the governor general.

Another formative experience was a conversation he had while eating lunch with his aunt in the Legislative Building, where she worked. His aunt told him, “You could do this. You could be elected and be a public servant.”

“I’ve never forgotten those two incidents,” Gillingham says. “They’ve always stuck with me for some reason.”

He believes it is every Christian’s responsibility to be involved in the political process.

“We have been blessed with a democracy,” Gillingham says. “We should steward that democracy, we should serve God and serve others, and if we have the opportunity to participate in our political realm – whether it’s through voting, volunteering in a campaign, being part of a party, or running politically as I have done – then I think it’s incumbent upon us to be good stewards of the privileges that we have.”

Gillingham is looking forward to serving on council, and to returning to CMU at some point.

“Every time you take a course, especially at the graduate level, you should go into it expecting to be stretched and pulled a little bit, and that has certainly been the case,” Gillingham says, adding that he has been challenged and invigorated by his professors and fellow students at CMU.

“My goal is certainly to continue (my studies) when I have the opportunity and time.”