Exciting Weekend of Activities Slated for September 30 to October 1

CMU invites the public to experience two exciting days on campus and get a taste of university life during its Fall Festival 2011, being held September 30 and October 1 at 500 Shaftesbury Boulevard, Winnipeg.

“Fall Festival – replacing CMU’s traditional Homecoming – affords a wonderful opportunity to connect with our university community and participate in variety of exciting events.  Come, visit our campus, experience our faculty in action, glimpse the vibrant student life at CMU, and share in the program, vision, and potential of our university,” says Vice President External Terry Schellenberg.  “Everyone – students, alumni, friends, donors, community members – is welcome to be part of a renewed weekend that will connect and inspire.”

Following the award presentations, guests gather at 7:30 p.m. to explore the issue of human rights in an evening presentation of words and music.  CMU offers a thought-provoking lecture for the public, entitled “It’s Not Only about You” by faculty member Paul Doerksen, followed by a response from faculty member John Derksen. Woven into the presentation will be music of the Quartet for the End of Time, by Olivier Messiaen.

Visitors with an interest in athletics can watch the exhibition volleyball games in the Loewen Athletic Centre from 7 p.m. to 10 p.m. on Friday.

Activities on Saturday get underway with the challenging MennoCross bike races, 11 to 5 pm. Racers ride a course that twists and turns around CMU’s north campus.  In addition to the competitive class, there are races for beginner and intermediate riders as well as kids. Registration details are available online.

Alumni reunions take place in the afternoon, as well as an alumni choir rehearsal for the evening performances.

Beginning at 3 p.m., a variety of activities get underway, with games, a children’s “bouncy house,” dunk tank, and a pie auction included in the festival’s offerings.  Visitors – and especially parents of students – may be interested in taking tours of CMU’s student residences and campus buildings and grounds.

Of particular interest to guests, from 4 p.m. to 5:15 p.m., will be the presentation of five short “Faculty Samplers” in two time slots.  The “samplers” will offer a taste of the passion and expertise of CMU’s faculty. Dietrich Bartel presents Music as Wellness; Gordon Zerbe’s sampler is Walking the Streets of Paul’s Philippi, Virtually; Candice Viddal offers A Hymn to God’s Glory:  Physics and the Spiritual Dimension; Tim Rogalsky presents Logic Unlocks Pauline Puzzles! Mathematics as a key to understanding the letters of Paul; and a workshop presentation by David Balzer explores The Art of Communicating in Church and Society or why I think our storytelling should be ‘pathetic.’

CMU invites guests to stay for a free BBQ supper followed by an evening celebration service at 7 p.m. featuring the wonderful voices of CMU Alumni and Student choirs conducted by faculty members Janet Brenneman and Rudy Schellenberg, along with student sharing and a short address by CMU’s President, Gerald Gerbrandt.

CMU’s full weekend schedule can be viewed online at www.cmu.ca/fallfestival.html  and on our Facebook Page Canadian Mennonite University, Fall Festival tab. You can also follow CMU_Alumni on Twitter.

Located in Winnipeg, Manitoba, CMU has over 1,700 students at its Shaftesbury Campus in Southwest Winnipeg, at Menno Simons College in downtown Winnipeg, and enrolled through its Outtatown discipleship program.

CMU is a member of the Association of Universities and Colleges of Canada (AUCC).

Retired businessman Ted E. Friesen, together with his two brothers, further developed D.W. Friesen & Sons (now Friesens Corporation) into a major business, fully employee owned, and serving the community in significant ways. Throughout his career, Friesen has been an active participant in Mennonite Central Committee, the Canadian Conference of Mennonites, and Eden Mental Health. He also served as the Secretary and President of the Mennonite Historical Society of Canada for 28 years (1968 – 1996) and it was during this period that the three-volume Mennonites in Canada was published. A lifelong resident of Altona, Friesen is a founding member of the Altona Mennonite Church.

“I am very grateful for the honour bestowed on me on this occasion by CMU,” said Ted Friesen in accepting the award. “That feeling is also accompanied by a sense of humility when I remember colleagues and co-workers in the various organizations that I have been associated with in the past who would be as worthy if not more worthy for achievements in the area of our mutual work. So, as a survivor, I also accept this award remembering their contributions.”

Friesen began working with his father’s business at the age of 16, Gerbrandt said, noting that today, nearly 75 years later, Ted Friesen still walks across town to the company office, in summer and in winter. “Over the 35 years that Ted and his two brothers, Dave and Ray, led the business, they grew it into one of the premier, most technologically sophisticated printing companies in North America,” said Gerbrandt. “Ted, like his father and brothers, believed that a business should serve its community, and Friesens has modelled that commitment.”

Friesens Corporation has grown into a company of international status and prints for such organizations as National Geographic and major American universities. Not only is it the largest employer in Altona, said Gerbrandt, the employees actually own the company in a unique employee ownership structure

Gerbrandt noted that, besides being an outstanding businessman, Ted Friesen is a churchman and an involved community citizen. “Ted grew up in the Altona Bergthaler Church, and remained active there for many years. Later, he became a founding member of Altona Mennonite, where he and Linie remain active. As a young man, he became involved with the Board of Christian Service of the Canadian Conference,” said Gerbrandt, “and in 1964 he was on the first executive of MCC Canada, helping to establish MCC’s office in Ottawa in 1970.” His involvement with MCC developed his conviction that Mennonites in Canada needed their history told, said Gerbrandt, which led to the establishment of the Mennonite Historical Society of Canada in 1968,

“I worked in two communities,” Friesen commented, “the local one, which is the Altona community; and the community of Canada, on the board level of Mennonite Central Committee and the Mennonite Historical Society of Canada and other organizations. When I look at all of these today, I am amazed at how they have grown from humble beginnings and have reached a position that is making a significant impact today, in today’s society, both in the Mennonite and in the larger community. I rejoice that past efforts have been blessed beyond all expectations.”

Gerbrandt further noted Ted’s passion for quality classical music, observing that Ted and Linie raised their family to appreciate fine music and today remain regular attendees at concerts. “Many a young musician has been encouraged through support from Ted and Linie,” said Gerbrandt.

Gerbrandt expressed the appreciation and gratitude of the CMU community for Ted Friesen’s lifelong service to the community: “Thank you, Ted Friesen.”

“I want to give tribute to my good wife Linie and my family who have been very, very supportive all the way. And, in closing,” said Friesen, “I simply want to say with JS Bach, Soli deo Gloria – to God be the Glory.”

Canadian Mennonite University (CMU) is a Christian university in the Anabaptist tradition, offering undergraduate degrees in arts and science, business and organizational administration, communications and media, peace and conflict resolution studies, music and music therapy, theology, and church ministries, as well as graduate degrees in Theological Studies and Christian ministry. Located in Winnipeg, Manitoba, CMU has over 1,800 students at its Shaftesbury Campus in Southwest Winnipeg, at Menno Simons College in downtown Winnipeg, and enrolled through its Outtatown discipleship school. CMU is a member of the Association of Universities and Colleges of Canada (AUCC).

Students from Canadian Mennonite University’s Media Workshop launched into their course by providing news coverage of the opening of CMU’s new Science Lab. Students were just 10 days into the class and did a great job on this first project! 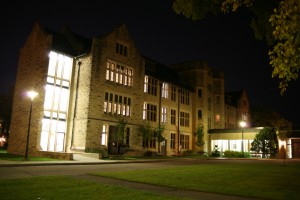 Students from Canadian Mennonite University’s Media Workshop launched into their course by providing news coverage of Homecoming Weekend 2010. Students were just 10 days into the class and did a great job on this first project!

CMU is pleased to bring beloved Canadian singer and songwriter Bryan Moyer Suderman to CMU for a free public intergenerational concert on September 25, 2010 at 1:30 pm.  This performance is offered as part of CMU’s broad range of homecoming and 10th Anniversary celebration events to which both the CMU family of alumni and friends and members of the broader community are most welcome to attend.

Bryan Moyer Suderman has a gift for writing songs that are deeply scriptural, musically memorable, and readily singable – songs that are at once simple, catchy, profound, and fun. Since the release of his first studio album “God’s Love is for Everybody” in 2002, Bryan’s “songs of faith for small and tall” have become favorites of families and congregations across North America and beyond, and have been published in numerous hymnal, songbook, and curriculum resources, including the Gather Round Sunday School curriculum, Leader magazine, and the Church Hymnal 4th Edition of the Church of Scotland. Bryan’s newest release, “A New Heart,” is his 4th CD on the SmallTall Music label (www.smalltallmusic.com).

“Like all really good singer and songwriters, Bryan has the gift of turning mountains of careful thinking and compassionate outcries into pearls,” says Cheryl Pauls, Associate Professor of Music at CMU. “Bryan’s pearls live in time, and they make us want to believe in the hope and the healing of the Jesus through whom he sings.”

Bryan has many years of experience performing and inspiring people to sing, whether in congregational settings, house concerts, or large ecumenical conventions and conference events including various Mennonite Church Canada/USA assemblies and Mennonite World Conference Assemblies in Zimbabwe (2003) and Paraguay (2009). Audiences respond to the warmth of his voice, the contagious nature of his songs, and his signature interactive style of singing and song leading.

Bryan lives near Toronto, Ontario with his wife and son, and travels extensively, mostly by train, living his vocation of “building up the body of Christ by creating and sharing songs of faith for small and tall.” You can find out more about his music ministry at www.smalltallmusic.com, and about his innovative “community supported music” initiative at www.bryanmoyersuderman.com.

The Bryan Moyer Suderman concert is being held at 1:30 pm in CMU’s Laudamus Auditorium, situated on CMU’s north campus at 500 Shaftesbury Boulevard.

Other weekend events include Friday evening’s tour of CMU’s Science Laboratory, a two-piano concert featuring Cheryl Pauls and Verna Wiebe, a science and faith lecture, “Seeing more clearly in a blurry landscape: science and ambiguity,” by Assistant Professor of Biology John Brubacher, along with a few basketball games.  Saturday’s events include soccer exhibition games, Menno Cross, which is a cyclo-cross bike race, a dinner and awards evening, and a time of worship at CMU’s annual Choral Evensong, featuring CMU’s talented ensembles along with a volunteer alumni choir, conducted by Janet Brenneman and Rudy Schellenberg.

CMU’s full weekend schedule can be viewed online at www.cmu.ca/homecoming.

Canadian Mennonite University (CMU) is a Christian university in the Anabaptist tradition, offering undergraduate degrees in the arts and sciences, business, communications and media, peace and conflict resolution studies, music, music therapy, theology, and church ministries, as well as graduate degrees in Theological Studies and Christian ministry. Located in Winnipeg, Manitoba, CMU has over 1,800 students at its Shaftesbury Campus in Southwest Winnipeg, at Menno Simons College in downtown Winnipeg, and enrolled through its Outtatown discipleship program. CMU is a member of the Association of Universities and Colleges of Canada (AUCC)