Winnipeg – A woman who has spent more than 30 years working for justice in Israel-Palestine, the executive director of an organization that serves low-income people in need of support, a pastor-turned-TV producer who volunteers with people who have Alzheimer’s, and a Congolese immigrant who helps newcomers to Canada are the recipients of Canadian Mennonite University’s (CMU) 2014 Blazer Distinguished Alumni Awards.

CMU President Cheryl Pauls is pleased to present the awards to Kathy Bergen, John Neufeld, Lorlie Barkman, and Odette Mukole on Saturday, September 27 during the Opening Program ceremony at the university’s Fall Festival. 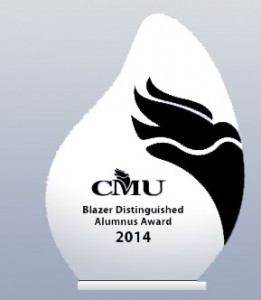 The Blazer Awards are presented annually to alumni from CMU and its predecessor colleges: Canadian Mennonite Bible College (CMBC) and Mennonite Brethren Bible College (MBBC)/Concord College. The awards celebrate alumni who, through their lives, embody CMU’s values and mission of service, leadership, and reconciliation in church and society.

“We are humbled and inspired by the honour and care all four of these alumni extend to people who are often marginalized,” Pauls says. “We give these awards to thank them for the example of their lives.”

Pauls will present the awards during CMU’s Opening Program at 7:00 PM on Saturday, September 27 in CMU’s Loewen Athletic Centre as part of CMU’s Fall Festival.

Earlier that day, the public is invited to meet and interact with Bergen, Neufeld, Barkman, and Mukole during an event at 4:00 PM in CMU’s Laudamus Auditorium. During this hour, the award recipients will reflect on their personal and professional journeys. There will be time for questions and interaction.

Information about the 2014 award recipients: