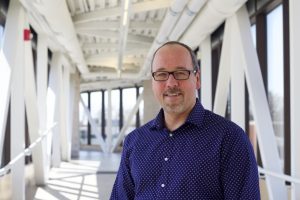 David Balzer, Assistant Professor of Communications and Media, has taught at CMU since 2009.

I love it when I can mentor students to find their voice. I mean that almost literally, because when students first walk into the recording studio, it’s often quite an unnerving and anxious-filled experience for them to speak into a mic and literally discover the tone of their voice—and then on a deeper level, to find out who they are as creative communicators.

What are you researching and writing?

I’ve got two projects on the go. One of them is on the history of Mennonites and radio in Manitoba. I’m looking at two seminal radio programs that originated in the late 1940s and 50s: “The Gospel Light Hour” from the Mennonite Brethren community, and “Abundant Life” from what was then known as the Conference of Mennonites in Canada. I’m trying to understand the way these programs were shaped theologically as well as shaped from a communications theory perspective. My hunch is that exploring these two programs might tell us something about why we’re doing broadcasting the way we are now. The other thing I have on the go is my ongoing “Oh My God” project.

A student who is originally from Uganda walked into my office the other day and she said, “I have a dream.” The media in her country is governed by a very different system—one that doesn’t allow grassroots efforts to easily have a voice or access. She wants to take what she’s learning here at CMU and bring it back to her home country. She’s started to understand the power of media, and she wants to empower local writers and journalists to be able to tell their stories. That’s inspiring. That gives me hope.

The thing I really long for is for students to recognize communication as a gift from God. We’ve been given this incredibly beautiful ability to communicate. That’s something that’s fragile, so how do we give that gift away in a way that is life-giving? I hope students will get that.

Do you have any interesting projects underway in the broader community or church?

I’ve developed a series of workshops that I present at schools and churches called, Social Media: The Good, the Bad, and the Beautiful. It tries to get participants thinking about how we use social media, and also presents some very direct how-tos they might use if their social media use is going to be beautiful in the end. I don’t go out there as an expert, but instead I tell people, I’m living the question just like they are.

I have a couple one-liners that I use to keep me focused. One that I like is, “Communicating for Life,” with a capital L. That in a nutshell encapsulates my desire to equip and help people, and also produce things that at the end of the day lead people to capital L Life with the One who created us.

A friend of mine in the communications business sent me a note about radio. For anyone who has ears, this information about radio is worth sharing.

“February 13 was the second annual World Radio Day (sponsored by UNESCO. It was created to promote worldwide access to information and freedom of expression over airwaves.

An article on Mashable (http://mashable.com/2013/02/13/radio-in-the-digital-age/) on the occasion of World Radio Day says the following about this medium.”

+++++++
From Mashable…
Despite the evolution of high-speed Internet and television’s prevalence in today’s culture, radio is still a very important and relevant medium — especially in developing nations. World Radio Day reminds us not only that digital hasn’t “killed the radio star,” so to speak, but also that radio can help drive change around the world.

Below, we’ve compiled five intriguing facts about global radio use that may surprise you.

1. 95% of the World’s Population Uses Radio
According to UNESCO, more than 95% of the world’s population uses radio. That high figure probably says it all, but to put it in even more perspective, this is compared to roughly one-third of the global population having access to Internet at all (let alone reliable or high-speed connections).

As a result, radio can reach the most isolated communities (which includes many Native American populations in the U.S.), in addition to the poorest, where Internet cannot.

3. Radio Is the Only News Medium on the Rise in Russia Since 2008
Besides radio, all traditional forms of news media in Russia are in decline — even in Moscow, where there is an advanced print media market. The average monthly adult readership for daily newspapers decreased by 3.1% between 2006 and 2010.

Daily radio audiences, on the other hand, have risen 4% since 2008.

Certain geographical features affect the way countries receive information. For example, in rural areas of the Philippines, mountains get in the way of TV signals, but not radio communications. Radio reaches 85% of the entire country, while TV reaches just under 60%. As a result, radio is considered the most reliable medium for distributing news in the Philippines’ rural interior.

5. AM/FM Still More Popular Than Online Streaming
American adults listen to eight times more AM/FM radio than satellite radio, and 17 times more than Internet audio streaming. It will be interesting to see how these numbers change as innovation in the space increases.