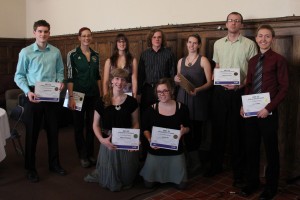 March 30, 2012 –  Members of the CMU varsity soccer, basketball, and volleyball teams gathered earlier this month to recognize the outstanding achievements of CMU athletes   for the 2011-12 MCAC seasons.

The MCAC recognizes student-athletes who achieve a grade-point average of 3.0 (80%) or higher with academic awards for Scholar-Athletes. This year, 47 members of CMU varsity teams received recognition for their classroom success (69% of all team members) at CMU’s March 11, 2012 Athletics Awards Banquet.

Other major award winners included Jacob Miller of the men’s basketball team who was selected Male Athlete of the Year. The 5’10 second-year guard was selected to the MCAC All-Conference Team for the first-time earlier this month and helped lead the Blazers to a first-place finish in the regular season.

The Trailblazer Award, given to a student-athlete who showed excellence in team leadership and community service was awarded to Todd Reimer of the men’s volleyball team. The 5’10 outside hitter from Rosenort has captained the Blazers and will be graduating from CMU this spring.

The following athletes were honoured by their CMU coaches with varsity team awards:

Canadian Mennonite University has over 1,700 students at its Shaftesbury Campus, at Menno Simons College in downtown Winnipeg, and enrolled through its Outtatown discipleship program. CMU is a member of the Association of Universities and Colleges of Canada.