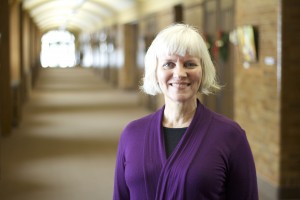 Wendy Kroeker, Instructor in Peace and Conflict Transformation Studies and Co-Director of the Canadian School of Peacebuilding, has taught at CMU since 2011.

Working at CMU gives us the opportunity to get to know students over a period of time, interacting with them during significant moments of life decision-making. Watching them take opportunities to engage in community events and issues gives me hope for the world.

This past semester, I taught an upper level PACTS course called Cultures of Violence, Cultures of Peace. I wanted to find ways for students to begin to love and appreciate theory. I’m thrilled if I’ve been part of inspiring an activist or the heart of an activist in someone, but as someone who’s doing my own academic work and working in an academic institution, I do want to excite students about theory. If we aren’t grounding ourselves in really thinking through things substantially, how do we move into meaningful action?

What are you researching and writing?

I am currently working on my PhD dissertation. I’m using the Philippines as a case study. I interviewed 36 Filipinos who are deeply engaged in peacebuilding, who come from highly colonial, conflict-impacted trauma environments, and I’m trying to honour their stories by creating some theory out of the patterns of what I’m hearing from them. Although I’m using the Philippines as my case study right now, I will eventually turn the findings from this dissertation project into looking at our Canadian context, and how the learnings from courageous local peacebuilders in the Philippines might lead to creative ways in which we can follow the Truth and Reconciliation Commission’s calls for action.

In November, a group of students went to a Standing Rock protest at Portage and Main. At a certain moment, they all went over the barricades and shut down Portage and Main at rush hour. One student spoke about her experience in chapel. Hearing her talk about moving over the barricades and realizing her own agency—that gave me some hope. It shows me that the things we talk about in class are moving deeper than the surface.

I want students to look for opportunities and possibilities where they won’t just be bystanders, but upstanders – people who see a wrong and act upon it. They may not be at Portage and Main, but I want everyone to see possible ways of honouring the dignity and integrity of each person around them and see that there’s some way they can stand with people.

Do you have any interesting projects underway in the broader community or church?

Clairissa Kelly and I have begun a series of exchanges between my students and students in the Peguis Post-Secondary Transition Program. Clairissa and I have committed ourselves to thinking through how we can find ways to, with students, take steps of reconciliation. I invited the Peguis group to join the intro PACTS class in doing the blanket exercise, an interactive learning experience that teaches little-known indigenous rights history. Afterward, one of the participants shared about community experiences of residential schools. Her openness was a gift to all of us around the circle. That was a profound moment.

When Darnell Barkman found out he would be home in Canada during the Canadian School of Peacebuilding (CSOP), he had to enrol.

Barkman was one of 84 students from around the world who gathered at Canadian Mennonite University (CMU) June 15-26 for the school, which offers two weeks of five-day courses for peacebuilders from all faiths, countries, and identity groups.

Originally from Abbotsford, BC, Barkman was in Canada on furlough after spending the past three years living in Manila, Philippines, working as a pastor and peacebuilder. It’s work he feels passionate about, but because the Anabaptist-peace position is a relatively new concept in the Philippines, it’s difficult at times.

“Peacebuilding can be very lonely work,” Barkman says, adding that in addition to learning from world-class instructors, the CSOP was massively energizing because it allowed him to connect with other peacebuilders. “It’s amazing. It’s what we need.”

Creating that sort of environment at the CSOP is key, says Valerie Smith, the school’s co-director.

“There are all kinds of ways to measure success, but to me the most important are how valuable people find their classes, and how engaged they are with their instructors and each other,” Smith says.

“The 2015 courses went very well. The instructors were a good fit, and we once again had a radically diverse student body, which adds to the richness in the classroom and in the CSOP community more generally.”

In addition to Canada and the U.S., the school included students from Nigeria, Somalia, South Africa, Vietnam, Iran, and elsewhere who travelled to Winnipeg to learn, network, and engage in peacebuilding.

Instructors included Leroy Little Bear, one of the continent’s leaders in the advancement of North American Indian philosophy, and Christopher Marshall, a trained and accredited restorative justice facilitator who teaches at Victoria University of Wellington, New Zealand.

The 2015 CSOP also included a launch event for Voices of Harmony & Dissent: How Peacebuilders are Changing Their Worlds, a book exploring the stories, theory, and tools of 16 peace leaders, trainers, and activists from around the world.

Each contributor has taught at the CSOP. Smith edited the book with Richard McCutcheon and Jarem Sawatsky.

“All of the essays are written by deeply committed, experienced peacebuilders who are living what they teach,” Smith says, adding that the book was a few years in the making. “It’s really exciting to have it finished and available to the public.” 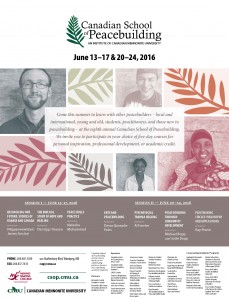 With the 2015 session over, Smith has turned her attention to the 2016 school. Registration is now open at www.csop.cmu.ca.

As they do every year, Smith and her colleagues have planned courses that feature exceptional instructors who are also strong peacebuilding practitioners.

CSOP always aims to provide a mix of courses that have to do with biblical and theological studies, basic peacebuilding skills, and indigenous issues.

“To be a peace school in this context with integrity, we have to do that,” Smith says.

This past April, CMU announced a new Masters of Arts in Peacebuilding and Collaborative Development, which bridges the fields of peacebuilding-conflict resolution studies and development-transformational justice studies.

Four of the courses the CSOP will offer in 2016 can be taken toward earning that MA.

She adds that she is looking forward to next June. 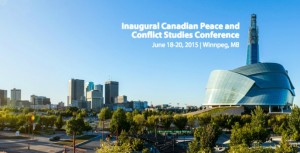 More than 70 academics, students, and conflict resolution practitioners from across Canada gathered for a series of keynote addresses, panel discussions, and workshop sessions.

“Our vision was to bring those two groups together and talk about how we want to contribute to the Canadian and international context in what our fields can offer or assist with,” says Kroeker, who teaches Peace and Conflict Transformation Studies at CMU.

“Often we do things individually, so we were wanting a stronger voice to emerge for the national context. This conference was to initiate that space for folks around the country interested in these issues, to decide what kind of group, what kind of organization, we’d like to form going forward.”

Kroeker says that she and her fellow organizers wanted to include a variety of voices in the dialogues at the conference.

“We had a broad spectrum of people and we wanted to open up an invitational space,” Kroeker says. “We want to stretch the boundaries of the field to be accessible, provocative, and inclusive.”

The impetus for the conference was sparked in May 2014 during a meeting of academics from the field of peace and conflict studies at Saint Paul University in Ottawa.

The assembled group began inquiring if creating a Canadian peace and conflict studies association would be of interest.

A steering committee was formed and the first conference was organized.

On Friday, June 18, those assembled at CMU made the decision to put together an association in Canada for peace and conflict studies.

An interim board has been put together, with Dr. Timothy Donais, Associate Professor for Global Studies at Wilfrid Laurier University, serving as interim coordinator. The board’s first meeting is scheduled for September.

In addition to the historic agreement, the conference included a keynote address by Dr. Christopher Marshall, Professor of Restorative Justice at Victoria University of Wellington in New Zealand. During his address, Marshall explored current trends in restorative justice theory and practice.

Meanwhile, Dr. Dean Peachey, Executive Director of the University of Winnipeg’s Global College, and Ruth Taronno, an International Development Studies instructor and Director of Practicum and Alumni Relations at Menno Simons College, kicked off the conference with a roundtable discussion exploring field/practicum placements in peace and conflict studies.

Anglophone and francophone academics from throughout western Canada and southern Ontario presented papers during the three-day conference, which also included a visit to the brand new Canadian Museum for Human Rights.

Kroeker says she is pleased with how the conference went.

She and her fellow organizers wanted to allow for the possibility of relationship-building, and planned an academic conference that left plenty of time and space for registrants to mingle and speak with one another during breaks and mealtimes.

“Our focus was to get some cross-fertilization going, and people said we did accomplish that,” Kroeker says.