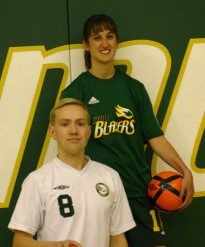 On January 20 to 21, CMU will host its inaugural Copa de la Paz (Cup of Peace) Futsal Tournament in the Loewen Athletic Centre.
“This is a major event for us as we make efforts to increase the soccer opportunities for our CMU soccer programs as well as the other collegiate programs in Manitoba,” says CMU Director of Athletics Russell Willms.

Developed in South America, Futsal, or fútbol de salon, (hall or indoor football) is played by teams of five players, with one member of the team being a goalkeeper on an indoor court, where walls are not in play. The rules create an emphasis on improvisation, creativity, and technique as well as ball control and passing in small spaces.

The tournament will feature men’s and women’s teams from University of St-Boniface, Providence University College, Red River College, and the hosting teams from CMU. Local Premier Development League club, WSA Winnipeg, has also committed support by providing a raffle prize-pack that includes a pair of season tickets to its upcoming 2012 PDL campaign, joining other tournament sponsors Home Run Sports and Little Caesar’s Pizza.
“We are happy to have the soccer community behind us in this way and we hope that this tournament will lead other Manitoba colleges and universities to get involved to host similar events,” adds Willms.

CMU is hopeful that the Copa de la Paz will also promote continued development of  sportsmanship, friendship, and camaraderie amongst the Manitoba players. “We often say at CMU, ‘Peace is at the heart of everything that we do.’ It is out of this campus focus that the Cup of Peace has taken its name. It is our hope that this tournament will be a means by which new friendships can emerge among our athletes through sports.”

Day passes are available at the gate for $3 for Adults and $2 for Students.

Competing in the Manitoba Colleges Athletic Conference, CMU plays in a league comprised of nine universities and colleges in Manitoba and Minnesota.  CMU is also a member of the Association of Christian College Athletics (ACCA).

CMU Blazer teams compete in soccer, volleyball, and basketball from September to March, playing MCAC league games as well as a number of tournaments with universities and colleges in Canada and the US.

Canadian Mennonite University (CMU) is an accredited Christian university offering undergraduate degrees in the arts, music, music therapy, theology, and church ministries, and master degrees in theological studies and Christian ministry. CMU is a member of the Association of Universities and Colleges of Canada (AUCC). Located in Winnipeg, Manitoba, CMU has over 1,700 students at its Shaftesbury Campus in Southwest Winnipeg, at Menno Simons College in downtown Winnipeg, and enrolled through Outtatown, CMU’s adventure and discipleship program. Visit www.cmu.ca/blazers
News release posted January 18, 2011