When Danielle Klassen has a moment of free time to study, she uses every minute of it.

Klassen is one of 14 CMU students who achieved a 4.0 GPA in a full-time course load while also competing on a CMU athletics team.

“Balancing school and sports can definitely be a challenge,” says Klassen, a first-year student from Calgary who attends Foothills Mennonite Church.

“(This past semester) I had to make sure I was using my time efficiently. I also made an effort to try to get assignments done ahead of time instead of leaving them to the night before.” 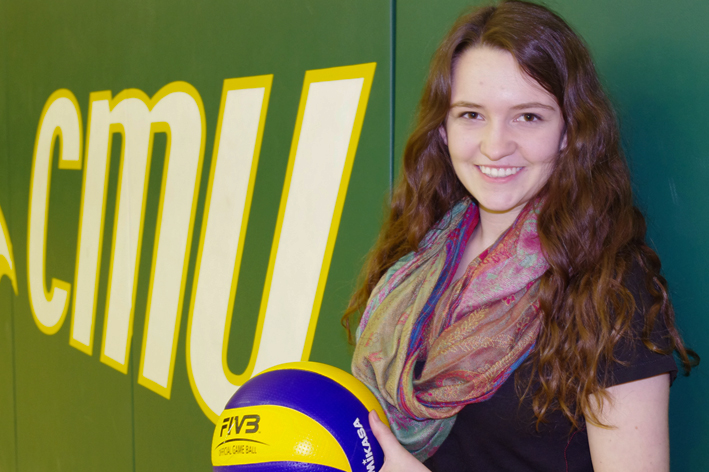 The time commitment needed for things like practices, games, and traveling for tournaments can be substantial.

But the time and dedication needed to excel at both academic and athletic pursuits points to more than just an ability to work hard.

According to Russell Willms, CMU’s Director of Athletics, such abilities tend to translate well outside the CMU world, pointing to strength of character and ability to succeed after a student has long since graduated.

“The time, energy and attention that we have witnessed this year is a testament to the dedication of these students,” says Willms.

Nick Czehryn just completed his first year at CMU with a 4.0 GPA, while playing for the CMU Blazers soccer team.

Although achieving the athletic-academic balance is challenging for Czehryn, the rewards outweigh the costs.

“There’s a high level of play, and good competition. Everyone’s excited to be there, and achieving a good balance isn’t as hard as I thought it might be. I enjoy being together with my team.”

Klassen also appreciates the time spent with her teammates.

“It is a priceless gift to be able to pay with girls who can be focused on the accomplishments of others as well as their own achievements,” she says.