John Ralston Saul’s interest in Indigenous people dates back further than 2008, when he published A Fair Country, the book in which he argued that Canada is a Métis nation, heavily influenced and shaped by Aboriginal ideas.

Not everyone knows that Ralston Saul has been interested in Canada’s Indigenous peoples for four decades.

In the spring of 1976, when the respected intellectual and award-winning writer was 29, he travelled to Inuvik and the High Arctic Islands as an assistant to Maurice Strong, the founding chair and CEO of Petro-Canada.

The trip was nothing short of eye opening for Ralston Saul, who had just spent seven years in France, first earning a PhD and then running a small investment firm in Paris. He thought he understood Canada, but in listening to the Indigenous peoples that he and Strong met with, he realized he didn’t.

“(They were) making arguments I’d never heard (before),” Ralston Saul said. “They weren’t talking for or against, they weren’t talking romantically about nature the way southerners do. And I realized that I’d been deeply lied to—that my education had not prepared me for the reality of my own country.”

Since that experience, Ralston Saul has sought to better understand Canadian history and draw awareness to Indigenous issues.

His most recent book, 2014’s The Comeback, calls on readers to embrace and support the comeback of Indigenous peoples, and highlights the need to rebuild relationships with them

Ralston Saul travelled to Winnipeg last month to talk about the book with students in the course “Reconciling Our Future: Stories of Kanata and Canada” at Canadian Mennonite University’s (CMU) Canadian School of Peacebuilding (CSOP).

Ralston Saul came at the invitation of his friend, Niigaanwewidam James Sinclair, who taught the course.

During his visit to CMU, Ralston Saul also gave a public lecture at the university exploring immigration that drew a capacity crowd.

“What’s happening all over the country at a growing rate is that Canadians who were totally ignorant on Indigenous issues are gradually becoming less ignorant,” Ralston Saul said in an interview prior to the lecture.

He credits courses and books taught and written by Indigenous people with leading the charge.

“I’m kind of the exception to the rule that in the new wave, there aren’t that many non-Indigenous people that are writing in the nonacademic world,” he said.

He added that he has always been careful to write neither to, nor for, Indigenous people. If anything, he is writing to a non-Indigenous audience.

“I use my voice to say, Wake up guys. There’s a life and it’s got the word ‘Indigenous’ written all over it. So, you better wake up.”

Ralston Saul likens publishing A Fair Country to leaping off a “great, big diving board.” Given the nature of the book’s ideas, he thought it could be the end of his career.

Instead, he was thrilled to see Indigenous people embracing it.

He recalls talking about the book with Indigenous young people in Rainy River, a town in northwestern Ontario.

“(That was) very exciting because I think that so much of Canada is in the south, written by the south, for the south, and there’s a real denial of two-thirds to three-quarters of the country,” he said.

Before writing The Comeback, Ralston Saul wasn’t planning to return to the topic of Indigenous affairs. In fact, he had an entirely different book planned.

Still, he woke up one day with the feeling that he had to write something before the 2015 federal election that expressed his belief that rebuilding right relationships with Canada’s Indigenous peoples was of utmost importance.

“I had to intervene in the election as a writer to say that for me, and I think for the country, this is the single most important issue, and people should be voting on the basis of how the political parties stood on this issue,” he said.

He is pleased that Canadians voted in a government that says that it believes that the Indigenous question, unresolved as it is, is the single most important issue in Canada.

“We’ve come a long way, (us) non-Aboriginals,” Ralston Saul said. When it comes to these topics, there’s momentum now. “Suddenly, it’s moving. We have to make sure it keeps moving.” 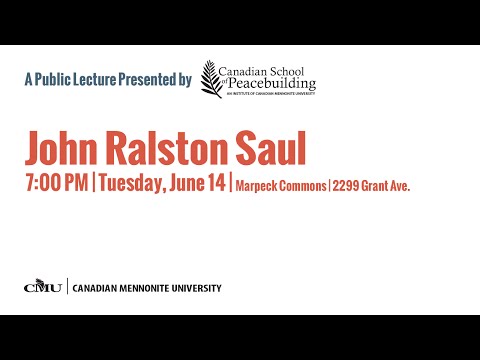 ‘Living with Uncertainty: The Road to Peace’ title of lecture

Respected public intellectual and award-winning writer John Ralston Saul will give a lecture exploring refugees and immigration at the Canadian School of Peacebuilding (CSOP) next month.

Ralston Saul will present the lecture, titled, “Living with Uncertainty: The Road to Peace,” at 7:00 PM on Tuesday, June 14. He will speak in Marpeck Commons (2299 Grant Ave.) at Canadian Mennonite University. Admission is free, and all are welcome. A book signing will follow the lecture.

“We are excited to have John Ralston Saul at the 2016 Canadian School of Peacebuilding,” says Wendy Kroeker, co-director of CSOP. “His writing and thinking is incisive and provocative. He pushes us as Canadians to consider our national values as well as the actions that should emerge from those values, and calls us to remember our Aboriginal heritage.”

The lecture arises from Ralston Saul’s observation that Canada is more and more isolated from its allies because, without exception, the United States and European countries are shaping themselves towards internal divisions and external fear.

One of the curiosities of the continent is that every year over the last 70 years, it has received large numbers of immigrants, and yet it has never been able to admit that this would require massive changes in how they imagine themselves.

In many ways, this crisis is all about an immigration continent, which cannot admit that reality, and so, has no immigration policy. In the lecture, Ralston Saul will posit that only by embracing concepts of uncertainty can they find ways to live together, both within their countries and with their neighbours.

Declared a “prophet” by TIME magazine, Ralston Saul is included in the prestigious Utne Reader’s list of the world’s 100 leading thinkers and visionaries. His most recent book, The Comeback—an examination of the remarkable return to power of Aboriginal peoples in Canada—has greatly influenced the national conversation on Indigenous issues in the country.

CMU caught Ralston Saul’s attention last year when he heard about a few significant events at the university, including a forum about the possibility of an urban reserve at Kapyong Barracks and the university hosting Iranian students from the International Institute of Islamic Studies in Qom, Iran.

“The work faculty and students have been cultivating is remarkable,” Ralston Saul tweeted. “Creating bridges and fostering dialogue.”

In addition to delivering the public lecture, Ralston Saul will co-teach the CSOP course “Reconciling Our Future: Stories of Kanata and Canada” with Niigaanwewidam James Sinclair.

“That John is co-teaching with Niigaan speaks of the importance of friendships in working through challenging issues,” Kroeker says. “John’s participation indicates a strong interest in furthering people’s grappling with the violent legacy of negotiations with Indigenous peoples in Canada.”

An institute of Canadian Mennonite University, CSOP is a learning community of diverse peacebuilders who come together to learn, network, and engage in peacebuilding. CSOP offers a selection of five-day courses each June that can be taken for professional or personal development, or for academic credit. CSOP is for peacebuilders from all faiths, countries, and identity groups. Learn more at csop.cmu.ca.