The accident that came to shape Lisa’s life happened three months after her first birthday. She was run over by a car.

“The front and back wheel went over my head,” Lisa said. “My eyes were pushed out and my ear was almost cut off—it was just hanging by a little bit of skin. I was unconscious for 32 days and the doctors said there was no hope I would make it.”

She beat the odds and went on to a productive life as a Mennonite Central Committee volunteer and Sunday School teacher for 30 years.

But it wasn’t easy. Lisa, who asked that her identity not be disclosed, suffered a life of challenges that resulted from the accident when she was a baby.

She was born in 1951 in southern Manitoba, growing up in a town of only 4,000 people. She started school with everyone her age but, by Grade 8, classes became too difficult for her to continue. Times of dark discouragement came as she grew older and saw her life was different from those around her, particularly in the way she processes her thoughts and relates to others.

“I would see what my [younger] sister was doing, and I felt that I should be doing the same thing. It bothered me immensely.”

Lisa became the poster child in her family as “the girl who had the accident”.

Eventually she moved to Winnipeg and began a cafeteria job. After about five years, she attended Bible school, receiving her Sunday School and Clubs teaching certificate. She returned home, found a job and got married in 1974.

Life’s pain had not ended, however, as she became pregnant in 1977 and labor complications arose. “[My daughter] was all blue when they took her out. Then they said ‘something is wrong, she is not breathing.’ I can still see them pumping air into her as I was on the stretcher. They said [my baby] was a girl, but they had to rush her off.”

The daughter’s esophagus and windpipe were not fully developed, making eating and breathing difficult. Four months after birth, the child continued to vomit when fed, leaving tube feeding as the only option.

After 13 months in the hospital, the family was finally able to go home, where Lisa had to tube feed her daughter.

“I felt I was doing such a rotten job in trying to look after her. I just felt awful.”

As Lisa faced the daily challenge of feeding her daughter, she found hope in scripture.

“I had her sitting in the high chair and then with every spoon, I quoted, ‘I can do all things through Christ who strengthens me.’”

Also, life in the family home grew difficult and the marriage between Lisa and her husband fell apart.

Despite everything she has faced, Lisa has impacted young lives through three decades as a Sunday School teacher and she has spent numerous hours volunteering at the local MCC Thrift Store. Much of her days are now spent tying blankets that are used in MCC relief kits.

Lisa has proved it is possible to make it through the grimmest circumstances as she faces everything that comes her way with a renewed spirit of strength and trust, knowing she will be protected.

Bethany Daman is a student at Canadian Mennonite University. She wrote this article as part of her work in the course Journalism—Principles and Practices. “Voices of the Voiceless” is a class project that aims to chronicle the humanity of often-ignored people on the margins of our community 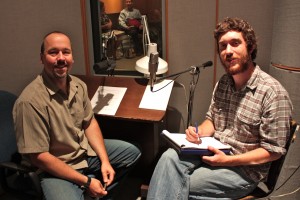 In this interview, David Balzer, host of Sunday@CMU, speaks with Adam about his Practicum with Open Circle, a prison visitation and community integration program of Mennonite Central Committee. Adam shares stories about the people he met and the impact they have on his life.