Ted Fransen presented a cheque to CMU President Dr. Cheryl Pauls in September, bringing the endowment for the Jacob A. Rempel Memorial Scholarship to $100,000. Fransen is one of Rempel’s grandsons.

The scholarship awards $5,000 annually to a student pursuing a Master’s degree in CMU’s Graduate School of Theology and Ministry.

Seeing the endowment reach the $100,000-mark is satisfying, Fransen said, noting that every branch of his grandfather’s family has contributed to the scholarship since it was established in 2000.

“I feel a sense of tremendous satisfaction that the legacy of our grandfather has had that kind of impact, where people in our family believe so strongly that the legacy needs to be remembered and memorialized,” Fransen said. “I feel just an overwhelming sense of gratitude.”

“CMU is thankful to the family of Jacob A. Rempel for their generous support of the university,” Bergen said. “I have watched this endowment increase by $60,000 over the past decade, and the earnings now provide a substantial scholarship.”

“I’ve seen the impact this scholarship has had as recipients have taken on significant roles in church and community after graduating from CMU,” Bergen added. “When the award is significant—$5,000 in this case—it makes a lot of difference to a student who is able to then focus more fully on their studies, rather than think about how they’re going to pay for their tuition.”

Fransen and his extended family created the scholarship to honour the memory and legacy of Rempel, a leader of the Mennonite churches of Ukraine/Russia.

Rempel started out as a poor stable boy but eventually became a university professor.

He did this with an enduring faith as he followed God’s leading hand, applied his own abilities, and was encouraged by the generous financial assistance of a wealthy supporter.

Rempel’s life was cut short on Sept. 11, 1941 when he was executed for his beliefs under Joseph Stalin’s dictatorship.

Rempel’s family is grateful that someone noticed a “diamond in the rough” in that stable boy and provided the means for his education.

Through the Jacob A. Rempel Memorial Scholarship, the family wishes to encourage students who show academic promise and a strong interest and aptitude for church ministry.

Joshua Nightingale, who is completing his Master’s degree during the 2017-18 school year, is the most recent recipient of the scholarship.

Nightingale said he appreciates the money he received.

“It meant that I didn’t have to work this past summer and could focus on writing my thesis,” said Nightingale, whose thesis wrestles with the presence and absence of God for those who have experienced trauma.

Nightingale hopes to eventually go on to doctoral studies.

Fransen said he feels a warm sense of appreciation meeting and hearing from students like Nightingale who have benefited from the scholarship, as well as a sense of optimism that the future is in good hands.

Fransen added that he appreciates CMU for continuing to provide an excellent theological program.

The Leadership Scholarship, worth up to $14,000 distributed over four years, is offered to recent high school grads displaying significant leadership ability, academic excellence, personal character, vision and a commitment to service. Preference is often given to students demonstrating a broad range of skills and interests.

Students applying for CMU’s Leadership Scholarship are required to provide a resume of their leadership involvement in a variety of areas, along with two letters of recommendation and an essay reflecting on a leader who inspires them.

All four of this year’s recipients demonstrated a strong grasp of the variable nature of leadership, and a commitment to leading in prominent or background capacities as needed with humility and grace. Some expressed a commitment to servant leadership within the church, and all share a love for sport, volunteering, and the arts.

‘Business can be about more than just making a profit,’ says Benjamin Shantz

Business is in Benjamin Shantz’s blood. While his friends spent their summers in high school working shifts at local fast food restaurants, Shantz was running his own lawn care operation, Benjamin’s Lawn Mowing and Services.

The business earned Shantz enough spending money during each summer, and while his friends were obligated to work the hours their supervisors scheduled for them, he enjoyed the flexibility making his own schedule afforded him. 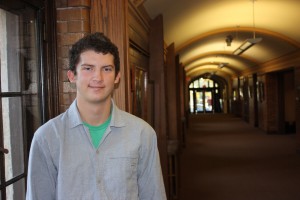 But Shantz says one of the biggest benefits of running his own business was relational.

Today, Shantz is in his first year of studies at Canadian Mennonite University (CMU). He received a full tuition scholarship for his first year of study from CMU’s Redekop School of Business as well as Mennonite Economic Development Associates (MEDA).“Mowing lawns in my neighbourhood allowed me to build relationships and get to know people in the community,” the 19-year-old says. “I always enjoyed that, as opposed to having a job where I didn’t interact with anyone.”

Shantz says he gets his entrepreneurial spirit from his family.

“My grandfather and dad were involved in business, and my dad was big on teaching my brother and I how to manage our money,” he says.

His grandfather, Glen, was an electrician with his own contracting company who also owned a number of rental properties. Meanwhile, Shantz’s father, Rick, owned his own IT consulting firm for a number of years.

Participating in CMU’s Outtatown Discipleship School last year also influenced Shantz to study business, and it gave him a new perspective on what running a business can look like.

While in Guatemala at the beginning of 2013, he and his fellow students worked with a ministry called Solomon’s Porch. The ministry includes a café, and the income generated by the café is used to further the Solomon’s Porch ministry.

“I saw how business can be about more than just making a profit,” Shantz says. “It can also be used to give back to a community – in this case, to finance a missional organization that builds houses for people.”

As a result of his experience abroad, Shantz is working towards a double major in Business and International Development Studies at CMU.

While he’s not sure what sort of business he wants to be involved with after he graduates, he knows it will be the kind of business that reflects the things he has come to value over the past few years.

“It will be a business that’s tied to the community and relationships and helping people,” he says.