Canadian Mennonite University invites the public to a launch event celebrating the release of Take and Read: Reflecting Theologically on Books, a new book written by Dr. Paul Doerksen, Associate Professor of Theology and Anabaptist Studies.

The event takes place Sunday, December 4 at 2:00 PM in the Atrium at McNally Robinson Booksellers (1120 Grant Ave.). Admission to the book launch is free, and all are welcome to attend. 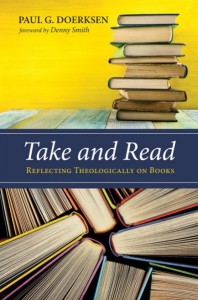 Published by Wipf and Stock, Take and Read is a collection of essays first presented as oral theological reflections on books, written to stimulate conversations among diverse groups of readers.

These reflections introduce and offer samples of theological readings of a variety of books. The result is a collection of essays addressing a wide range of topics from food security to violence, from dementia to indigenous issues.

“I hope that anyone interested in joining conversations about any number of issues will read this book, because it really is a series of conversations with other books which address various topics,” Doerksen says.

Take and Read takes its name from a theological book discussion group that Doerksen has led since 2004 as part of CMU’s continuing education initiatives.

The group has included farmers, physicians, teachers, poets, novelists, scientists, people involved in business, finance, relief work, and many other walks of life, ranging in age from 20-something to 80.

Doerksen’s prepared reflections for these gatherings are never meant to draw conclusions about the books themselves, or about the topics addressed by the authors. Rather, the reflections serve as a starting point for the group’s conversation.

Reading the literary works that Doerksen discusses in his new book is not a prerequisite for enjoying the volume.

“My hope is that if you haven’t read the book and you read the essay about the book, it will drive you to it,” Doerksen says. “If you have, I hope the essay brings up connections and questions, and some evaluative dimensions in response to the book.”

Ultimately, Take and Read is a theological enterprise. The book is perhaps best described as an invitation to joining a conversation about books, and more importantly, about God.

A professor at CMU since 2011, Doerksen has a PhD in Western Religious Thought from McMaster University. He also holds degrees from Conrad Grebel University College, the University of Winnipeg, and Briercrest Bible College.

He is the author of Beyond Suspicion: Post-Christendom Protestant Political Theology in John Howard Yoder and Oliver O`Donovan (Wipf and Stock, 2009).

Peacebuilding in Laos, the history of Mennonites in California, Deuteronomy, and the portrayal of clergy in pop culture—recent books by faculty from Canadian Mennonite University cover a wide range of topics.

The university will recognize faculty who have published work in the last year-and-a-half at a special celebration happening on Wednesday, December 9, 2015 at 3:00 PM.

The celebration will take place at folio café in Marpeck Commons (2299 Grant Ave.). Admission is free, and all are welcome to attend.

In addition to selling and signing their books, CMU faculty will give brief presentations about their work.

The event will celebrate the following books:

Because each author has a background in teaching and is also involved in a church community, their work will appeal to a variety of readers, including lay readers, pastors, teachers, and more.

“These writers are not just speaking to other scholars,” says Dr. Vic Froese, Library Director at CMU, who is organizing the December 9 event. “They are aware that there is an audience that has a more practical interest in what they have written.”

Froese is looking forward to the celebration.

“I hope that people who attend learn more about the excellence we have here on our faculty,” he says, adding that the event is also meant to recognize the hard work of CMU’s professors. “We want to express our appreciation to them and congratulate them on a job well done.”

Winnipeg – How does the portrayal of clergy in secular culture affect the church? What are the cultural factors that might make the ministry a hard sell? And have literary and cinematic works been misrepresentative, misleading or even harmful?

These are some of the questions at the heart of The Collar: Reading Christian Ministry in Fiction, Television, and Film, a new book by Sue Sorensen, Associate Professor of English at Canadian Mennonite University (CMU). 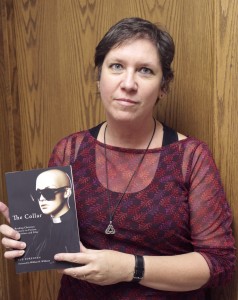 The Collar combines thematic analysis and close readings to create what publisher Cascade Books describes as, “a wide-ranging study of the many ways—heroic or comic, shrewd or dastardly—Christian ministers have been represented in literature and film.”

Sorensen adds that The Collar is a good intersection of her interests in church, literature, and film.

“These are all things that profoundly affect me,” she says.

Concentrating on works from Canada, the United States and England, Sorensen explores a variety of novels, plays, TV, and movies—from The Scarlet Letter to Footloose—to make inquiries about “pastoral passion, frustration, and fallibility.”

Sorensen says that one of her personal incentives for working through the clerical references in literature and film is that many people she knows, including her husband, are members of the clergy.

She notes that ministers are often portrayed as conservative, out of touch and repressed—a description that does not fit the church leaders she knows.

When she began work on the book, Sorensen could think of many negative portrayals of Christian ministers in literature and film, and hoped she would find more positive portrayals in her research.

However, some of the books she found most heartening included portrayals of pastors who were failures, but good failures—characters who were deeply flawed human beings but trying their best to serve God and the church.

“I did not find heroic, positive role models, but I think I found something better,” Sorensen says.

While it may seem contradictory, Sorenson’s style in The Collar is both scholarly and accessible. She hopes the book reaches a wide audience, so that the average person in the pew can pick it up and read it.

Ultimately, Sorensen wants The Collar to be of service to the church. As she notes in the book, all Christians are ministers.

“Most of us do not think of ourselves in this manner from day to day, but unconsciously we must be studying pastoral actions and attitudes for models of what we should be doing or not be doing.”

An active member of First Lutheran Church in Winnipeg, Sorensen is the author of a novel, A Large Harmonium, and the editor of West of Eden: Essays on Canadian Prairie Literature. She has written about contemporary British literature, detective fiction, film, popular music, children’s writing, and is also a published poet.

The Collar is available in stores now. A Winnipeg book launch event is planned for Sunday, October 5 at 2:00 PM at McNally Robinson (1120 Grant Ave.).

About CMU
A Christian university in the Anabaptist tradition, CMU’s Shaftesbury campus offers undergraduate degrees in arts, business, humanities, music, sciences, and social sciences, and graduate degrees in Theology and Ministry. CMU has over 1,600 students, including those enrolled in degree programs at the Shaftesbury Campus and its Menno Simons College and programs.