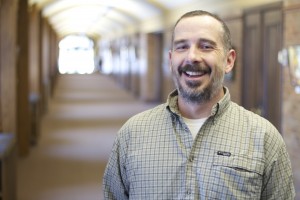 Kenton Lobe, Instructor in International Development Studies, has taught at CMU since 2005.

I love working with students, but in addition to that, I love my colleagues. I have a little neighbourhood at the end of the hall where my office is with two English professors and a colleague in International Development Studies. Paul Dyck is one of the colleagues, and he says he likes to think of this gathering of faculty as a fellowship. That always makes me smile, and that’s borne out of really rich conversations that we have across disciplines here. The size and scale of faculty makes that possible.

Participatory Local Development is a second year IDS class. For their major project, students are instructed to create something that roots itself in, and engages the participation of, the CMU community. In the past, that’s resulted in Wittenberg Radio as well as the CMU farm and community garden.

What are you reading for enjoyment?

I just finished reading Silence by Shūsaku Endō, which was recently adapted into a movie by Martin Scorsese. It’s a story of 17th century Jesuit missionaries to Japan and martyrdom. That one had an effect on me. I just started Children of Earth and Sky by Guy Gavriel Kay, a Canadian writer. He writes historical fiction that borders on fantasy.

The most significant hope I get from students is watching the work of the CMU Farm. Two students came to me seven years ago and asked why we don’t have agriculture on our 44 acres here. They put together a proposal, and we worked collaboratively to move that into the CMU context. Ever since then, it’s been the labour of students that has made this farm flourish.

I long for the academy to step outside of the classroom walls. We do some of that here at CMU with Outtatown and through our practicum program, but I long for a richer engagement with land-based learning. The CMU Farm is one example, but I’ve had students write papers about the Assiniboine Forest and memory, bridging philosophy and ecology that kind of builds on something right in their own backyard. I often wonder what would happen if we oriented our curriculum and our pedagogy around a 5 km. radius of the university. We could talk about Kapyong and urban reserves, we could talk about rail and transportation of oil, we could talk about wetland restoration on our campus—we could talk about all kinds of things and actually locate these things that otherwise become abstracted.

Whenever I left the house on a Friday night when I was growing up, my dad would always say, “Remember who you are.” Then, when I came to CMBC as a student, Harry Huebner—who was teaching theology at the time—had the same kind of saying. “Remember who you are” is a significant saying that sticks in my mind.

The topic “Empathetic Innovations for Inclusive Development: Can we learn from Grassroots Innovators?” will be addressed by Dr. Anil Gupta, senior professor at the Indian Institute of Management (IIM), Ahmedabad.

The lecture is scheduled for October 30, 2014 at 7:30 PM in the University of Winnipeg’s Convocation Hall. Light refreshments will be served beginning at 7:00 PM.

Dr. Anil Gupta is a professor at IIM, the top management and policy research institute in Asia and the Pacific region.
He is the founder of SRISTI, an internationally know NGO working for farmers’ innovation and creativity. Gupta’s development work led to the creation of the National Innovation Foundation, which he currently leads as Executive Vice President. He serves on numerous high-ranking advisory committees and policy groups in India and abroad on development, environment, science and education, ethics, and governance.

Dr. Gupta is an engaging public speaker and his work as an academic and activist is recognized by the Padma-shree Award, the highest civil honour conferred by the President of India.

About the Hopper Lecture

The Hopper Lecture Series is sponsored by the International Development Research Centre, in honour of its first president, David Hopper. The David Hopper Lecture 2014 is coordinated by Menno Simons College and the University of Guelph.

Menno Simons College (MSC), a part of Canadian Mennonite University and affiliated with the University of Winnipeg, has been offering programs in International Development Studies (IDS) and Conflict Resolution Studies (CRS) since 1989. MSC fosters a vibrant undergraduate learning community in its newly renovated facility at 520 Portage Avenue. It offers 3-year and 4-year majors and a minor in IDS and CRS, an honours program in IDS, and an extensive practicum program. MSC has over 1,000 students and hundreds of alumni working in the development and conflict resolution sectors in Manitoba, Canada, and internationally.

“Learning to do that well—to be able to capture a story visually—is interesting to me,” says Sawatzky, who participated in CMU’s Outtatown Discipleship School 2001-2002 and graduated from CMU with a three-year B.A. in International Development Studies (IDS) in 2006.

Sawatzky’s latest project combines his love for photography with his interest in international development. “A Sad Sort of Clean: Hydropower in Northern Manitoba” is an exhibit opening this Friday, May 3 at Winnipeg’s Flatlanders Studio that features photography and video Sawatzky created along with Cree elder Ellen Cook.

The photos and videos feature people and waterways that have been affected by hydro development in Northern Manitoba. Sawatzky and Cook spent 11 days last spring visiting Grand Rapids, Split Lake, and South Indian Lake, three communities that are between five and 11 hours north of Winnipeg.

Commissioned by the Interfaith Task Force on Northern Hydro Development, a coalition of leaders from Mennonite, United, Lutheran, and Roman Catholic churches and The Thunderbird Lodge who aim to promote thoughtful debate on hydro issues, “A Sad Sort of Clean” asks three questions: Is hydropower clean? Are new dams a good idea? Does Manitoba need new dams or a new approach to hydro?

“The purpose of the project is to show the human cost of our ‘green’ energy,” Sawatzky says. “It’s not to disparage or demonize Manitoba Hydro, but rather, to counter the clean image they present themselves with by showing the people and waterways at the end of the transmission line.”

“The goal was to show that our great hydro-electricity comes at a cost,” he adds.

It was during his time in Guatemala on Outtatown that Sawatzky first fell in love with photography. When he returned home to Winnipeg, he enjoyed getting the prints back that he had shot with a small point-and-shoot camera.

Sawatzky says he enjoys photography in part because it’s a way for him to record his experiences.

“Some people have a journal that they write in, but I’ve started to assemble photo albums for every year of my life,” he says. “It’s a way for me to document memories visually.”

Sawatzky’s Outtatown experience also led him to study IDS. The poverty he witnessed in Guatemala was eye-opening.

“Seeing the poverty, being out of my comfort zone, and seeing how the world actually operates made a big impact on me,” Sawatzky says.

In the years since, he has combined his love for photography and interest in IDS by working with non-governmental organizations in Egypt, Nepal, South Africa, and Zambia. He’s also travelled through India and New Zealand.

Sawatzky is currently working for a landscaping company and in September will start a pre-Master’s program in Landscape Architecture at the University of Manitoba.

“My time at CMU definitely shaped how I try and direct my life,” Sawatzky says. “Ultimately, I want to do work, whether it’s photographic or otherwise, that’s going to address inequalities in the world and work toward justice.”

“A Sad Sort of Clean” opens at Winnipeg’s Flatlanders Studio (782 Main St.) on Friday, May 3 from 7-10 PM. The exhibit will be up until the end of June. Regular hours are 1-4 PM on Saturdays and Sundays (closed May 25-26). For more information, visit the exhibit’s Facebook page at www.tinyurl.com/SadClean.

[youtube]http://www.youtube.com/watch?v=R0Wfw5rtMt0&feature=channel_video_title[/youtube]This video features Erin Weaver at at In Gratitude, April 16, 2011, a graduation weekend event that celebrates CMU graduates by inviting class members to share their experiences through spoken word or musical performance. The event brings together family members, graduates, students, faculty, and staff.