A two-week study tour to Europe provided Redekop School of Business (RSB) students with an opportunity to experience what they have studied in class.

Spending one week each in Western and Eastern Europe, participants learned about Europe’s economic, political, and social integration; met with various business, government and academic institutions; learned about Canada’s role in the global economy; and discovered ways the European Union (E.U.) utilizes its role to foster peace and development across the continent.

“The purpose of the tour was to see firsthand the significant changes taking place in Europe, that we discussed in class, and the challenges of integrating 28 countries within the E.U.,” says Jeff Huebner, Associate Professor of International Business. “On a tour like this, students see that the themes, issues, and topics we talk about in class are highly relevant,” he says.

RSB, a program of Canadian Mennonite University (CMU), develops the potential of future business leaders to bring together sound business practice with commitments of faith, generosity, and service.

Tour participants included a group of Canadian and international students and a member from the business community in Manitoba. The tour began with a week in Western Europe—visiting Belgium, Germany, and France—founding members of the E.U. The group visited various European institutions including the E.U. Council, Commission, and Parliament in Brussels; met with Canadian trade officials negotiating a new Canada-E.U. trade pact; visited the Frankfurt stock exchange and the European Central Bank; and participated in cultural activities in Paris.

The group also met with Titus Horsch, MEDA Europe Director and his wife Anita, who is a Canadian Mennonite Bible College alumna. Huebner has partnered with MEDA in various areas including on previous study tours to Latin America.

The week in Eastern Europe was spent visiting the Baltic countries of Lithuania, Latvia, and Estonia that have undergone significant changes in transitioning from the Former Soviet Union (FSU) to joining the E.U. a decade ago.

Highlights of this portion of the tour included meetings at the Lithuania parliament to discuss the country’s role in recently leading the E.U. Council presidency; briefings on Latvia’s transition to adopting the Euro currency this year; observing NATO fighter jets flying overhead and pro-Russian protests over the annexation of Crimea; and spending a day with students and faculty at LCC International University, an academic partner institution of CMU.

LCC University was the first English-speaking Christian university established in the FSU. Participants heard about LCC students’ perspectives on life in Eastern Europe and shared about Canadian life and culture.

For investor Norm Klippenstein, the visits to LCC University and with Canadian diplomats in Eastern Europe were highlights. Visiting LCC around the time of Russia’s annexation of the Crimea, Klippenstein says the conversations with Ukrainian and Russian students at LCC were priceless.

“LCC, with some 600 students, of which 60 and 80 are Ukrainian and Russian students respectively, provides a natural place for dialogue on these important peace issues,” he says. “The Canadian Ambassador’s candid reflections on the region’s history added to our understanding of the challenges the countries face.”

Huebner is working to enhance the international study tours offered by RSB and integrate them into the wider community, including the business community. Tours are offered each year, alternating in focus from business in Europe to economic development and microfinance in Latin America. Financial assistance is available for students through RSB travel grants.

Huebner is passionate about connecting students with real world experiences.

“What I enjoy most is opening the eyes of our students to the wider world that’s out there that has a lot of different needs,” he says. “We can use business in a lot of non-traditional ways such as combining it with development and missions, to make a positive difference in the world.”

The next RSB study tour, looking at microfinance in Central America, is being planned for spring 2015. If you are interested in participating, contact Jeff Huebner for more information.

As the fifth feature in the 2013/14 Face2Face conversation series, CMU’s Redekop School of Business Professor Jeff Huebner leads an interactive discussion exploring everything from the financial crisis in the United States to the Eurozone debt crisis. Discussion panelists will include a value investor from Niverville and an international student from Germany who speaks about the Eurozone crisis from a citizen’s perspective.

Global economic crises throughout the world over the past few years, what they mean for society and what the future holds are some of the topics that Jeff Huebner will explore at Canadian Mennonite University’s next Face2Face event.

Huebner, Associate Professor of International Business at CMU, will lead a discussion titled, “The European Debt Crisis and Other Wonders Hiding in the Global Economy,” on Thursday, February 27 at 7:00 PM in CMU’s Great Hall (500 Shaftesbury Blvd.). Admission is free, and everyone is welcome to attend. Face2Face is a series of conversations with CMU faculty designed to engage the community on a wide variety of current events and issues at the intersection of faith and life.

The discussion will explore everything from the financial crisis in the United States to the Eurozone debt crisis. Discussion panelists will include two participants from a course Huebner is currently teaching, “Business in the European Union”: Norm Klippenstein, a value investor from Niverville, Man. who is taking the course for personal interest; and Wil Bohlender, an international student from Germany who will speak about the Eurozone crisis from a citizen’s perspective.

In addition to rising debt rates in Canada and what that means for society, Huebner says that one of the aspects he is interested in exploring is the issue of trust, which is a core facet of Christian faith and of Mennonite communities.

“A lot of our financial system is based on trust – not only for citizens who are investing privately, but for countries like those in the European Union who are working together to use the Euro,” he says. “When something like the Eurozone debt crisis happens, trust can be shaken to the core and the question is: What happens if that trust is going to evaporate?”

Huebner, who is leading CMU Redekop School of Business students on a two-week study tour focusing on business and politics in Europe this coming April, is looking forward to the event.

“This is going to be an interesting panel discussion,” he says. “I’m excited to hear what people have to say.”

“The European Debt Crisis and Other Wonders Hiding in the Global Economy” is the fifth of six Face2Face events CMU will host during the 2013-14 school year. For the complete Face2Face schedule, please visit www.cmu.ca/face2face.

Winnipeg, April 30, 2013 – More than 40 businesspeople, students, and teachers gathered at CMU on April 9 as the university’s Redekop School of Business (RSB) partnered with the Winnipeg chapter of Mennonite Economic Development Associates (MEDA) for a luncheon.

The luncheon also included a 30-minute live videoconference with Veronica Herrera, the CEO of MiCredito in Managua, Nicaragua. MiCredito is a microfinance organization funded in part by MEDA.

“It was a great event,” Huebner says, noting that while CMU has had a business program for five years, it was only in the last year-and-a-half that it became known as the Redekop School of Business and started offering the Bachelor of Business Administration degree.

“The luncheon was a spotlight event where we could profile the school to the business community,” Huebner says.

MiCredito creates business solutions that include both social and financial support to micro and small entrepreneurs in Nicaragua, providing for a more prosperous future. It employs 54 people in seven branches, with a portfolio worth more than $4 million USD.

Six business students from CMU will visit the organization during an international study tour April 29-May 13.

Huebner says he organizes travel study programs so that students see and experience first-hand how their business knowledge and skills can be applied in other countries.

Huebner says he organizes travel study programs “so that students see and experience first-hand how their business knowledge and skills can be applied in other countries and among those who are less fortunate or who have different needs.”

At the luncheon, Huebner also introduced a new RSB scholarship. Worth approximately $6,500 in tuition savings, the scholarship has been established for a student endorsed by MEDA.

Established in 2011, the Redekop School of Business is developing the potential of future business leaders to bring together sound business practice with commitments of faith, generosity, and service. 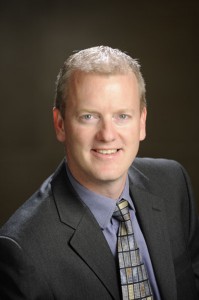 April 30, 2012 – The Board of Governors of Canadian Mennonite University (CMU) has appointed Jeff Huebner, MBA to faculty for the Redekop School of Business. Huebner will serve as Associate Professor, effective July 1, 2012.

In the 2012-2013 academic year, Huebner will teach courses on a range of topics, including Entrepreneurship and Microfinance, and he will lead a travel study course on Economic Development and Microfinance in Latin America.

“We are delighted to welcome Professor Huebner to CMU,” says CMU Vice President Academic Earl Davey. “The University received approximately 60 applications from across the world in response to its advertisement for a position in the Redekop School of Business and Jeff was our candidate of choice. We are confident he will make an enormous contribution to the cultivation of a distinctive program that reflects the character and commitments of CMU, and to the conviction that business can and must contribute to the greater good of communities locally and globally.”

Huebner comes to CMU from his role as Assistant Professor of International Business at Ambrose University College in Calgary, where he served for the past five years.

“One of my core interests is on international-focused business courses, and developing innovative travel study programs,” says Huebner. “I want students to be able to see and experience first-hand how their business knowledge and skills can be applied overseas. I encourage my students to apply their business skills to positively impact others, both locally and globally.”

Huebner’s two main areas of focus recently have been on developing and enhancing new courses suitable for business programs, and on developing international study opportunities and organizational partnerships for students to expand their global cross-cultural learning experiences, both of which align closely with CMU priorities.

“Huebner’s education and experience make him an ideal fit for business programming at CMU’s Redekop School of Business, which uses an inter-disciplinary approach to prepare students to become engaged in business and not-for-profit organizations, with a worldview and character shaped within a Christian university community.”

Prior to his teaching role, Huebner worked for over a decade in management and business consulting positions in a professional corporate context, and the last two of those years as Senior Research Associate in the Haskayne School of Business at the University of Calgary, conducting research on international business and trade. Huebner’s broad business experience provides him with a rich teaching context for his students, drawing on business case studies to illustrate concepts and principles. He has extensive experience in international travel and leading groups, and in addition to English, has basic knowledge of French, German, and Spanish.

Huebner completed his Bachelor of Commerce degree at the University of British Columbia in 1994, participating in a six-month international exchange program to Rotterdam’s Erasmus Universiteit in The Netherlands. He completed his MBA in 2004 in Calgary at the Haskayne School of Business. In 2003, as part of his program, he undertook an intensive three-week international exchange program through the European Business School in Oestrich-Winkel, German, with a focus on international business, European culture, industrial policy, marketing, law, and ethics.

Over the past 15 years, Huebner has made numerous presentations to Christian business and general business conferences. He has served on the board of Engineering Ministries International Canada, volunteered locally and overseas on church and mission projects. Huebner has also enjoyed serving as a community volunteer sports coach.