Piano, cello, and vocal performances were all part of the final round of the 10th annual Verna Mae Janzen Music Competition at Canadian Mennonite University.

Held on Wednesday, January 28 in the university’s Laudamus Auditorium, the competition featured six performers who progressed from an initial field of 18 competitors.

Bigland-Pritchard, a voice major in her final year of study, was surprised to win first place and the $700 award that comes along with it: She fell ill with laryngitis last semester which put her behind in her preparations for the competition.

“I just felt happy to be a part of the competition,” Bigland-Pritchard said. “I’m very humbled, honoured, and excited to win.”

Bigland-Pritchard is no stranger to the competition. She participated in 2012 and 2014, placing third both times.

This year, Loepp Thiessen placed second and received $500. Third place and its $300 prize went to Chin.

Bigland-Pritchard said that there is a great sense of camaraderie among the competitors.

“It’s a meaningful competition,” Bigland-Pritchard said. “We all want the best for each other, even though we’re technically competing.”

Terry Mierau, a former opera singer and alumnus of CMBC, one of CMU’s predecessor colleges, as well as Dr. Darryl Friesen, Assistant Professor of Piano and General Music Studies at Providence University College, served as adjudicators for the finals.

“It was very cool to receive their affirmation,” Bigland-Pritchard said. “It’s very meaningful to have that kind of feedback.”

Janet Brenneman, Dean of the CMU School of Music, said the competition is great because it creates a buzz on campus.

“It allows for students to bring their best performances, and for the entire CMU student body and community to see that play out in this competition,” said Brenneman, noting that a capacity crowd filled the auditorium for the finals.

“It’s a wonderful opportunity for students to perform their solo repertoire, and to see and hear what everyone else is working on,” Brenneman added. “We don’t always get that kind of opportunity.”

“It’s always a pleasure to see Peter,” Brenneman said. “He’s made a lovely connection with our students. It’s not often that students get to connect with a CMU donor in such a tangible way.”

For Janzen, sponsoring the event is a way to contribute toward the success of CMU. He wanted to support CMU via a music competition because he and Verna met through their interest in choral singing.

“I always dreamed of someday dedicating a memorial to my wife—a wonderful, loving, sensitive, intelligent, and happy companion,” Janzen said in 2007. “Through the Verna Mae Janzen Music Competition at CMU, I can keep her memory alive.” 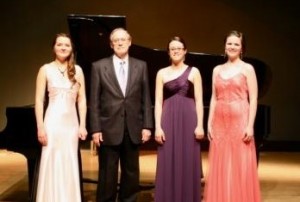 April 9, 2012 – The 7th annual Verna Mae Janzen music competition at Canadian Mennonite University (CMU) welcomed audiences for a public performance showcasing CMU’s talented instrumentalists and vocalists. The event required  a preliminary round of performances in the first week of March, followed by the competition finals that took place March 29 in the Laudamus Auditorium.

The Verna Mae Janzen Competition is made possible each year through the generous contributions of the event sponsor and prize donor Peter Janzen, from Deep River, Ontario. Janzen established the competition in memory of his wife, Verna Mae, who died of cancer in 1989 at age 53 and who shared the joy of singing with her husband. This was Janzen’s seventh year of travelling to Winnipeg to attend the competition.

“As founder of the Verna Mae Janzen competition, Mr. Janzen takes an avid interest in the development of our students,” says CMU competition organizer Henriette Schellenberg. “We are grateful for his interest and for his support for our student musicians and singers. It is gratifying to see the quality of performances, and to see how much our students appreciate having an opportunity to showcase their talents in a competition of this level.”

This year’s competition juror was distinguished conductor Henry Engbrecht, Professor of Music and Director of Choral Studies in the Faculty of Music at University of Manitoba. Engbrecht is a renowned conductor within the Manitoba community and abroad. He has trained a generation of conductors and teachers in Manitoba, acting as a model of excellence to them as well.

“CMU very much appreciated the privilege of welcoming Professor Engbrecht as this year’s juror,” says Schellenberg. “Receiving feedback from an expert provided competitors with an experience to grow and learn as musicians.”

The response from the audience to this year’s expanded program was very positive, says Schellenberg. “They really loved the variety, especially this year because of the different instruments.”

One thing that has not changed from previous competitions is the excellent performances of the competitors, especially those who reach the competition finals. Says Schellenberg: “I was pleased with the high calibre performances from CMU students and proud of the efforts that went into preparing for the Verna Mae Janzen competition.”